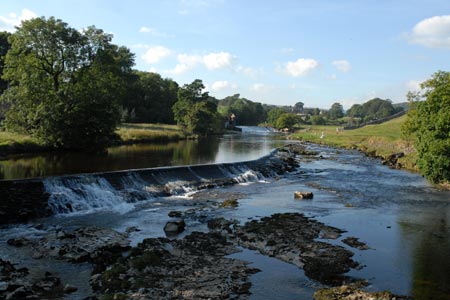 At 84 miles (135 km) long the Dales Way is a long-distance footpath in Northern England. The route starts in Ilkley, West Yorkshire, and heads north-west to end in Bowness-on-Windermere, Cumbria. The route was developed by the West Riding Ramblers' Association in 1968.

Less arduous than the Pennine Way and Coast to Coast paths, the Dales Way passes through the Yorkshire Dales and the Lake District National Parks. From Ilkley, the path follows the River Wharfe upstream to Ribblehead. The route continues by following several valleys including Dentdale, River Mint and River Kent to reach the shores of Lake Windermere. The section from Upper Wharfedale (Langstrothdale) over the watershed at Cam Houses into Ribblesdale is the most arduous and remote.

At a leisurely pace the route can be comfortably completed in a week but some walkers only take 4 days or less. The Dales Way is well served by public transport at start and finish of the route. Accommodation is mostly in plentiful supply, except the section over the watershed, with a choice of bed and breakfast, camping and pubs.

For much of the route the Dales Way passes through rural scenery with little urban development apart from villages including Grassington and Kettlewell in Wharfedale. The attractive village of Dent in Dentdale is one of the highlights.

An essential guidebook to walking the Dales Way. This picturesque 78 mile long distance route through the Yorkshire Dales between Ilkley and Bowness on Windermere is one of the gentlest multi-day walks in Britain. The route is described in both directions, visiting Grassington, Kettlewell, Buckden, Dent, Sedbergh and Staveley en route to Bowness. - More information