In 1956, a large part of the Llŷn Peninsula was designated an Area of Outstanding Natural Beauty under the National Parks and Access to the Countryside Act 1949. It is one of only five such areas in Wales. The logo for the AONB shows a Chough as this bird favours the peninsula's rocky coastline where there are around 60 nesting pairs. The Llŷn Peninsula AONB covers 155 square kilometres with approximately 70% of the area's population speaking Welsh. 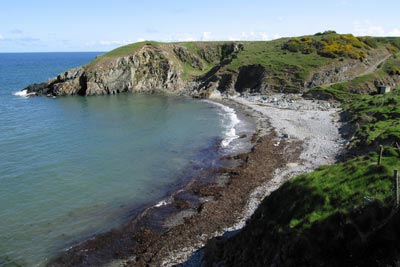 The landscape is generally rocky and wild with stone walls separating the fields. With a relatively low population the peninsula has a timeless feel. The Peninsula is a popular area for recreation and offers some excellent walking along the coastline and also inland. The 84 mile long Llŷn Coastal Path is an easy way in which to enjoy the diverse scenery with small coves, wide beaches, rugged cliffs, ever changeable seas and small harbours meaning there is always something of interest. The majority of the route is on public footpaths with limited sections using quiet lanes, permissive paths and beaches. The recently opened Wales Coast Path includes the Llŷn Coastal Path.

Inland there are many footpaths criss-crossing the landscape. With rocky areas of high ground scattered across the peninsula you are never far from a decent viewpoint often offering views to the nearby coast.