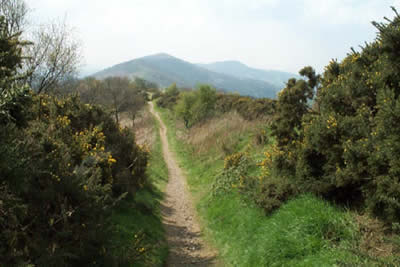 Despite its relatively small size there are a wide range of landscapes within the area. Dominating the scene is the distinctive narrow ridge that runs north south which culminates at the summit of the Worcestershire Beacon. This range of hills can be seen for many miles and most visitors see the area as limited to this ridge. However to the east lies the Severn Vale from which the Malvern Hills rise abruptly. The Vale is relatively flat with a patchwork of pastures whilst to the east lies the green rolling countryside of Herefordshire.

The variety of landscapes are a direct result of the underlying geology which includes the pre-Cambrian rocks of the main ridge, with sandstones, marls and limestone also found within the boundaries of the this AONB. The geological variety also leads to a wide range of habitats for wildlife.

Man has also had impact with three ancient hill forts on the main ridge. The most famous is the British Camp with its impressive ditches and ramparts. Around 13,000 live within the boundaries of the AONB with the towns of Great Malvern and Ledbury just outside the boundaries.

Malvern was an early tourist destination with many people arriving to 'take the waters' from the early 1800s. Today the area is popular with walkers with many paths criss-crossing the ridge and surrounding countryside. The recent inauguration of the Worcestershire Way footpath has added another reason for walkers to visit the area.