The Nidderdale AONB is an Area of Outstanding Natural Beauty in North Yorkshire sharing its western border with the Yorkshire Dales National Park to the east and south. The AONB includes most of Nidderdale itself, part of lower Wharfedale, the Washburn valley and part of lower Wensleydale. The highest land is Great Whernside which rises to 704 metres above sea level on the border with the Yorkshire Dales National Park. Pateley Bridge is the only town with Otley, Ilkley, Masham and Ripon just outside the borders. 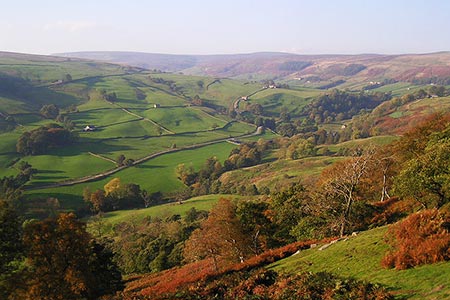 When the Yorkshire Dales National Park was created there were some who voiced their dismay at the exclusion of Nidderdale. However due to local political concerns, Nidderdale remained excluded when the Yorkshire Dales was designated as a National Park in 1954.There were later attempts to include Nidderdale but again local politics meant they were abandoned. In 1988, it was proposed the dale should be classified as an AONB, a process that was completed in 1994. The new AONB also included a section of Wensleydale below East Witton, the Washburn Valley and the area of lower Wharfedale between the Washburn Valley and the National Park.

Despite being somewhat overshadowed by its neighbouring National Park, Nidderdale offers walkers tranquillity in a rural setting without many of the pressures of commercialisation that National Parks attract. Nidderdale, Lower Wharfedale and the Washburn Valley all offer excellent opportunities for walking in pleasant surroundings with a network of well-signed public footpaths and bridleways.

The southern part of the AONB includes the reservoirs of the Washburn Valley, Lindley Wood, Swinsty, Fewston and Thruscross. With the highest ground to the west of the AONB along the watershed with Wharfedale, walking routes onto this wild moorland offer challenging territory. Elsewhere there are several reservoirs which offer perfect objectives for a short hike. Although the focus will always be on Nidderdale, Lower Wensleydale and its side valleys, Colsterdale, the valleys of the River Laver and the River Skell should also be considered as worthy of exploration on foot.