This long distance path is based on a journey undertaken by Alfred Wainwright in 1938 which took him from Settle in the Yorkshire Dales to Hadrian's Wall and back. The route's waymarking was finished in 2013 with the route now marked on Ordnance Survey maps. 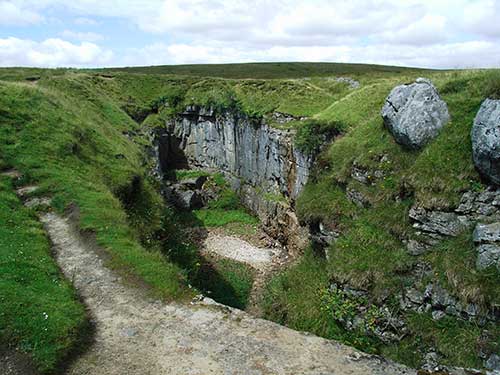 In the winter of 1991/92, after 10 annual Long Distance Paths, David and Heather Pitt wondered if they should not take Alfred Wainwright's advice in his Coast to Coast Walk guide and create their own walk and not "be merely followers of other people's routes". So they started to plan their own tribute to AW based on his "A Pennine Journey" a narrative description he had written of a circular walk he had undertaken in the autumn of 1938 from Settle to Hadrian's Wall and back. They put together a route which would take us to as many of the places mentioned in his book as reasonably possible, using public rights of way and not the roads that he used in 1938. It was 1998 before they finally walked the 230 mile route.

In 2003 the Wainwright Society was formed and they suggested to the committee that the Society take over their project and develop a guide to the walk. They edited the route descriptions from members of the stages that they walked incorporating route maps drawn by Ron Scholes (a friend of Alfred Wainwright) and illustrations by Colin Bywater. The quality of maps and illustrations were sufficient for Frances Lincoln, publishers of Wainwright's Lakeland fells guides, to describe the book as a 'pictorial guide' - an accolade only given before to AW's guide books. 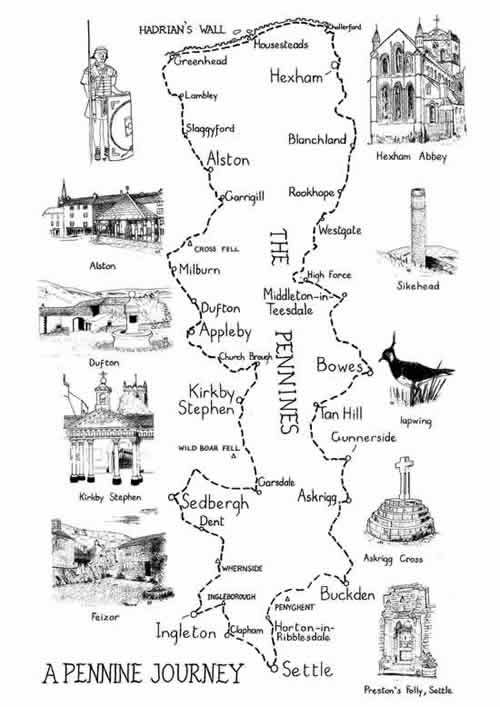 By the time the guide was launched agreement had been reached with the highways agencies along the route for it to be waymarked with the funds coming primarily from the sale of guide books. At this juncture the Wainwright Society stood aside from the project and so the Pennine Journey Supporters Club was formed and they have seen the tribute through to its logical conclusion - its inclusion on Ordnance Survey maps given AW's love of maps - "I admire their work immensely, being lost in admiration of all their work. Their maps are, as ever, my favourite reading."

A prerequisite for this inclusion was the route's waymarking and this was completed by 25th September 2013 in time for the 75th anniversary of Wainwright's first Pennine Journey. Ron Scholes' maps were sufficient for the Ordnance Survey and the first Explorer map was published in August 2014, the final one in September 2015 and by February 2016 it will feature on a new series of Landranger maps.