A classic route that follows the backbone of England. Crossing three National Parks the major challenge to walkers is often the weather as the wild upland moors are crossed. Despite the reputation of the moors and high land there are also some pleasant low level sections which offer some respite from the elements in bad weather. 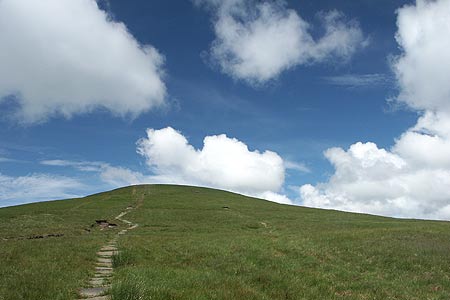 This 268 mile (429 km) long National Trail starts in the Derbyshire village of Edale and then heads north following the Pennines to the village of Kirk Yetholm, which is located just over the border in Scotland. Most people take 16 days to complete the trail although many walkers are content with short circular walks that include part of the Trail.

The Pennines form the backbone of England and include a variety of terrain although upland moorland predominates. The Trail includes sections within three National Parks - the Peak District, Yorkshire Dales and Northumberland.

From Edale the path climbs onto Kinder Scout before continuing over the moors around Bleaklow to reach Stoodley Pike with its monument. Top Withins is the next major point of interest before reaching the limestone scenery of the southern Yorkshire Dales. Here Malham Cove and Pen-y-ghent are key points in the Trail's progress. Continuing via the market town of Hawes the path follows upper Wharefdale before reaching the wild moors of Tan Hill.

Continuing north the walker passes the waterfalls of High Force and Cauldron Snout. High Cup Nick, one of the most dramatic places in English landscape is soon followed by Cross Fell, which at 893 m. (2947 ft.) is the highest point on Trail. Following in the footsteps of the Romans the Trail shadows Hadrians Wall before entering Kielder Forest to reach the moors of Northumberland where The Cheviot is the last high ground before descending to Kirk Yetholm just over the border in Scotland.

The Pennine Way - the Path, the People, the Journey

A portrait of the The Pennine Way, Britain's oldest and best known long-distance footpath, stretching 268 miles from the Peak District to the Scottish Borders. This personal, thoughtful and often humorous story of the path's remarkable history, includes the experiences of walkers and local characters on this exhilarating and complex path. - More information