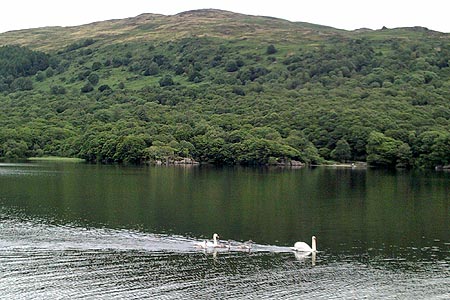 There are no marks for originality with this choice of Lake District walk but this is my own perspective of it. As is often the case with a Lakeland fell of relatively low height but an isolated position, it's lack of altitude (in this case 837 feet) is offset by the quality of the views and this describes Beacon Fell to the west of the southern end of Coniston Water.

This outlying Wainwright has an attractive tarn, Beacon Tarn, at its foot, the relative shallowness of which (maximum depth 26 feet) has earned it a bit of a reputation for wild swimming in summer. This was the case on the occasion of my visit in August 2013, though admittedly it was at a time when there had been an unusually hot summer by Lake District standards. Even so, the water could not be described as warm, but possibly bearable for people who are so inclined. While most of the visitors to the tarn were swimmers, one who wasn't was a Spanish man walking along the Cumbria Way, part of which runs alongside past Beacon Tarn, and he described it as "preciosa" which translates into English as precious or beautiful.

The walk is located close to the western shores of Coniston Water with a view towards the wooded Peel Island which is believed to be Wild Cat Island in the Swallows and Amazons book. Start at the Brown Howe Car Park (Grid reference SD 290911) and cross the main road. Follow it due south to locate a narrow lane on the right that winds its way up through bracken, heather and silver birch trees. Ignore the first signed public footpath on the left but take the second one where a broad grassy path opposite a field leads between bracken and passes under pylons overhead. Turn left at a fork in the path. The ascent is mostly gradual as the view opens out with Coniston Water on the left and the Old Man of Coniston and Dow Crag behind. Towards the top of Beacon Fell there is a short rocky stretch.

The top is marked by a small cairn and there is a fine 360 degree view with Stickle Pike (Dunnerdale) to the west, Top o' Selside across Coniston Water, with Peel Island very apparent, to the east and the sea at Morecambe Bay to the south. The curved shape of The Old Man of Coniston and the craggy peak of Dow Crag dominate the view to the north beyond Torver Low Common where a glimpse of Torver Tarn can be seen (shown as "disused reservoir" on the Ordnance Survey map). Beacon Tarn cannot be seen from the top, but it soon appears below on the descent of the south-west ridge as a path leads down to its shoreline and outflow, overlooked by the hill of Wool Knott to the south. The shallower part of the tarn is to the west as indicated by water lilies and reeds. From the southern end of the tarn, the Old Man of Coniston and Dow Crag dominate the background. The Cumbria Way route, which starts at Ulverston to the south, passes the west shore of the tarn and this is the way to go next. One point, about half way along, is particularly muddy and wet and requires circumventing to the left, although agile people may try jumping over the wettest and muddiest sections to reach more solid ground further ahead.

At the brow of the next hill there is a last look back at the tarn before it disappears from view. The path passes a large marshy area on the left that looks like it might have once held a tarn. The route heads towards Torver Tarn, but this particular walk instead leads back to the narrow winding road walked along earlier, though further up it. Once the road has been reached, it is a simple matter of returning to the car park at the start.

A guidebook to the 73 mile Cumbria Way, an easy long-distance walk though the heart of the Lake District National Park, from Ulverston in the south to Carlisle in the north, with good transport links to either end. The route is largely low-level but this guide offers alternative mountain days to climb some of the famous fells en route.
More information