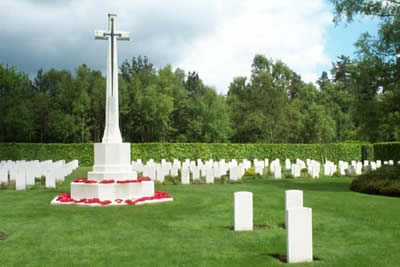 This Cannock Chase walk was designed to help us remember those who have lost their lives in war. It connects three locations where "Remembrance" is important and it is perhaps fitting that men from Germany and Britain share Cannock Chase as their final resting place. It is sadly also the resting place for men from other nations. Besides the two cemeteries there is a Memorial to 14,000 Poles who were executed in the Katyn Forest in 1940.

The best place to start is beside the Commonwealth War Cemetery (grid ref. SJ983154) located alongside the Brocton to Pye Green road and within site of the GPO tower that is visible for miles around. Personally I prefer to leave this Cemetery until the end of the walk preferring instead to walk the short distance northeast along the track to the nearby German war Cemetery where ranks of granite headstones blend beautifully with the typical Cannock Chase surroundings.

After visiting this understated memorial return to the track and continue north-east staying with the edge of the plantation. The track descends slightly into the valley containing Sher Brook swinging north to reach a junction of paths (grid ref. SJ988178). Like much of Cannock Chase there are many paths and it is important to take the clearest path heading left (south east). After approximately half a mile it meets a wider track and this is followed until you reach the road. Turn left and follow the road for a short way to turn left along another track signed "Katyn Memorial".

All that remains is to follow a roughly southerly direction using the most convenient paths to take you back to the Commonwealth War Cemetery with its immaculately tended lawns and graves. Returning to your car you might just realise how futile war is and how little "say" the average man had in deciding his fate. Perhaps all Governments should have learned this lesson by now?

Guidebook describing 42 half-day and day walks in the limestone landscapes of Derbyshire's White Peak, part of the Peak District National Park. One of two volumes, this book covers the east of the region, with potential bases including Bakewell, Eyam, Castleton, Birchover, Matlock and Wirksworth.
More information