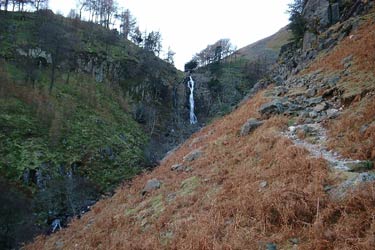 Great End is commonly climbed as a diversion en-route to Scafell Pike by walkers starting from Langdale or Seathwaite. It is, however, an impressive mountain and this route, which has a real mountaineering "feel" to it, is well worth doing when time does not allow an attempt on England's highest peak. This is a serious route and should not be attempted by inexperienced walkers.

The photographs for this Lake District walk were taken in late autumn when the first snow of the year had only sprinkled the highest summits. In summer, or in the conditions when these photos were taken, this is a walk, not a graded scramble. However, under snow or ice, the imposing north west face is suitable only for well equipped winter mountaineers. Most of the route is not difficult to follow but the correct approach (described in the text) from Sty Head to "the band" and then onto and up the face is vital as this is definitely NOT the place to lose your way! Note: allow at least an additional hour and a half if you wish to extend the walk to include Scafell Pike and return to Sty Head via the corridor route.

From Keswick drive south on the B5289 through Borrowdale. Just over a mile after passing through the village of Rosthwaite and just before the hamlet of Seatoller, take the second turning on the left, signposted Seathwaite. There is parking by the roadside just short of Seathwaite Farm but get there early on busy days as it fills up quickly (Grid ref. 235121).

Walk south to the farm and turn right through an arch in the farm buildings. Walk past the campsite and as soon as the beck has been crossed turn left and follow the path on the west side of the beck which soon starts to climb steadily until a knoll is reached giving the first view of the impressive waterfall of Taylorgill Force. The path steepens and some easy scrambling in an impressive situation is required soon after passing through a gate almost opposite the falls. After the scramble the path continues to climb passing to the right of Styhead Tarn until the mountain rescue box at Sty Head is reached (Grid ref. 218095). Sty Head is very much the cross-roads of the area with the paths to Seathwaite, Wasdale Head, Great Gable, Kern Knotts and Esk Hause amongst the routes meeting here.

Take the path to Esk Hause which heads due east from Sty Head. After few hundred yards you should ignore the corridor route to Scafell Pike which leaves to the right heading south. Continue on the Esk Hause track for another quarter of a mile as it rounds the foot of the nose of "the band" on your right. When the path ahead crosses a small beck (Grid ref. 224094) stop, look to your right and pick a line heading slightly west of south to take you up onto the crest of the band. Work your way up the band to a depression (Grid ref. 224088) which drains into Skew Gill. From the depression, the north west face of Great End is in full view with the north face stretching away to the left. A series of gullies is clearly visible below the summit. The gully on the extreme right is Custs Gully. When there is no snow or ice, this face is much easier than it looks and a series of cracks and rock steps leads to the foot of the gully without too much difficulty. (Note: in snow or icy conditions this face is for well equipped experienced mountaineers only). Don't enter the gully but traverse to the right and climb the broken ground to the right of the gully and its subsidiary, Branch Gully, which can now be seen for the first time. Careful but easy scrambling leads up a rough boulder slope and a cairn on the edge of the summit plateau is soon reached. The summit cairn is over 100 yards away to the south east.

From the summit, Scafell Pike can be seen over a mile distant to the south west. The descent path follows the path towards Scafell Pike until a depression above Calf Cove is reached after quarter of a mile. Turn left (east) and drop into Calf Cove pass a cross shelter and follow the clear path due east to Esk Hause (Grid ref. 233081) From Esk Hause a path leading north east leads to another cross shelter after quarter of a mile. At the shelter turn left and take the path heading north west dropping down to Ruddy Gill. (Note: from Esk Hause a path leads directly to Ruddy Gill but this path is not clearly marked on the map.- if you see the path use it but in bad visibility use the route just described). Ruddy Gill is named after the red ore which colours the soil and rock. As the gill narrows and turns north, cross it and take the path heading alongside east bank of the gill. The steep path follows the bank of the gill before crossing it at the point where it changes its name to Grains Gill. The west bank of Grains Gill is followed downstream and re-crossed again at the famous Stockley Bridge from where a good farm track leads back to Seathwaite.