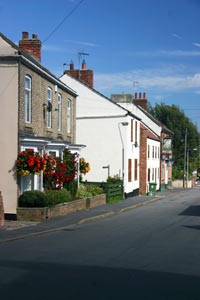 The Isle of Axholme is an excellent destination for walkers though it is often ignored despite having a fine network of well-marked footpaths. This walk aims to rectify the problem! Haxey's name originates from the Scandinavian for "Haki's Island". In 1741 this former market town suffered a calamitous fire and consequently has few old buildings apart from the church. Although St Nicholas's interior contains early Norman stonework the exterior offers a largely C15th Perpendicular face to the world, though there was some Victorian restoration. To the east of the churchyard is the stump of a market cross used as the "Fools" stone during the preliminary ceremonies to the Haxey Hood game. At the northwest corner a curious lynchgate revolves around a central post; something I have never seen anywhere else!

The far end of Church Street is known as Greenhill and there another market cross survives bearing a white lion on a red shield. This is the heraldic arms of the Mowbray family, the lords of the Epworth Manor that included Haxey and Westwoodside in the Middle Ages.

Haxey of course is renowned for it's annual Hood Game played on the 6th January, that day being Epiphany and the "Twelfth" day of Christmas. The "game" involves local teams battling vigorously to acquire a leather "hood" for their local inn. The game's origins are somewhat vague but supposedly reach back to the C13th with some sources dating it specifically to AD1213. It commemorates an incident on a blustery, wintry day when Lady Mowbray lost her scarf (hood) in the wind. From a group of thirteen nearby labourers one chased after it and having retrieved it was too shy to return it to her ladyship. Another, forward enough to do so, she pronounced to be a "Lord" and the former a "Fool". Nevertheless all thirteen received a grant of land - provided they undertook an annual re-enaction.

The walk also uses part of the former Isle of Axholme Joint Railway. This was the first to be built under the 1896 Light Railways Act, which was enacted to encourage the spread of rural railway lines by avoiding payment of expensive Parliamentary legal costs. The line opened in sections between January 1900 and January 1905. Passenger trains ceased in 1933 but goods services survived until 1965.

Haxey Turbary was formerly a peat bog where the local populace exercised rights to the cutting of peat and turves. Its drainage was begun in earnest, as indeed it was throughout the Isle of Axholme, in the 1620's by Cornelius Vermuyden on the instruction of King Charles I in order to convert the land for agricultural use, something that met with considerable (often violent) opposition from the local population. Today the Turbary is a nature reserve under the guardianship of the Lincolnshire Wildlife Trust. To learn more about a short trail within the reserve see the LWT website.

Westwoodside name has a literal meaning for it was a settlement on the outer edge of woodland within the Mowbray estates. It became a stronghold of Methodism (hardly surprising considering how close it is to Epworth) under the influence of John Wesley's regular preaching's there and once boasted three chapels. One survivor still stands on Nethergate where our walk crosses into Sandbeds Lane.

Notes Park considerately in Church Street, Haxey where there are two inns.

Walk along Church Street, heading away from the church and down to Greenhill to see the Mowbray Cross. Bear right down High Street, pass the Post Office and just after Marlborough Avenue (and before the chapel) go through the gate on the left onto the old railway. Follow this to a ramp by a school from which you should cross the road and descend a corresponding ramp on the far side. Now continue ahead passing beneath two overhead bridges.

Just after the cutting becomes an embankment you will come to a brick bridge with a parapet. Descend the steps on the left onto the grass track of Rocket Lane and keep ahead to a surfaced road.

Turn right, following the road, with distant views to the hills and windmills surrounding Epworth, and at its end continue ahead as a stony track develops. This leads to a fieldgate and the nature reserve entrance. Follow the obvious main track through the reserve until you eventually meet another prominent track at the far side at a 3-way footpath sign. Turn left past flooded quarries and take the left branch where the track divides. At the public road turn left into Westwoodside arriving at the picturesque pond.

Keep ahead into Upperthorpe Hill and after 200 yards go right along a fenced footpath - at first between houses. On reaching a path junction bear left into the Carpenters Arms carpark.

From the inn walk up Brethergate for 200 yards and then turn right onto the footpath opposite the end of Gollands Lane (by the PO) following it through to a road (Nethergate). Cross over into Sandbeds Lane, bearing right at a junction to join a track. Ignore all side paths and follow the track until it curves gently leftwards uphill to Haxey church. Climb some large stone steps to enter the churchyard and walk through back into Church Street.