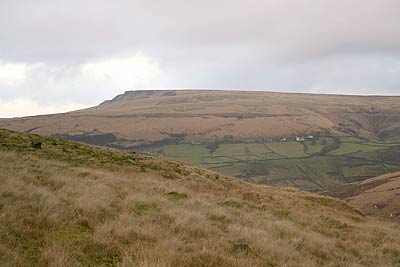 This Peak District walk is set in the heart of the South Pennines and traces the routes of various aspects of transport and industrial heritage. From the Pennine village of Marsden, the walk follows the route of some of the early trans-pennine roads built by Jack Metcalf - Blind Jack Of Knaresborough - across the peat bog moors above Marsden. It also follows the route taken across the moors by the horses used to pull canal barges whilst the barges were being "legged" through Standedge Tunnel - the longest and highest canal tunnel in Britain. We also pass by the tombstone of Enoch Taylor, one of the leaders of The Luddites who tried to prevent the mechanisation of the local woollen mills in the 18th Century.

Variations to the route are possible, including point to point walks (e.g. Greenfield to Marsden) rather than circular routes, by making use of the regular local train services between Huddersfield and Manchester that stop at both Marsden and Greenfield.

Traditionally, the route starts from the Parish Church (Grid ref. SE047117) in the centre of Marsden. However, a slightly different start point is chosen for this walk, from the Standedge Visitor Centre Car Park (Grid ref. SE 047118) in the old railway goods yard, a site that also houses the National Trust centre for the Marsden Moor Estate. As well as providing the largest car park in the village, the Standedge Visitor Centre Car Park is adjacent to local bus routes (the 352 service from Huddersfield to Marsden Dirker) and next to Marsden Railway Station.

From the car park, turn left (down hill) on Station Road towards the centre of the village. When the road starts to bend left (next to the Medical Centre), take the road leading off to the right towards the Parish Church. The tombstone of Enoch Taylor is prominent on the left, across the road from the Parish Church. Follow the road around the perimeter of the church to it's junction with the A62. With care, cross the A62 and take the minor road opposite - Old Mount Road. Old Mount Road is the route of the first turnpike road (TP1) from Wakefield via Huddersfield and Marsden to the old county boundary at Austerlands. Much of the original road was built by Jack Metcalf (Blind Jack Of Knaresborough) who was renowned for his method of laying two courses of bound bundles of heather on a cambered shallow cut through the marsh / bogs then setting a layer of stone on top of this and topping with a gravel surface.

Follow Old Mount Road / TP1 to Green Top Farm then turn right on the waymarked footpath, bearing left at a wall end and continuing up hill to pass through a gate in to National Trust Open Access Land, eventually reaching a wide track. Follow this track to a spot known locally as Mount Bar where the track, Old Mount Road and Mount Road meet. Mount Road is the second turnpike road (TP2) and was constructed to improve the course of the original road and thereby avoid some steep gradients either side of Millstone Edge. Built in around 1815, TP2 was Blind Jack's last major project.

It should be noted that, even in the middle of a long hot, dry spell of weather, the next section of the route can be very wet underfoot. Cross Mount Road and take the grassy track off to the left which is the route of TP2 and follow this track towards Warcock Hill and passing around Redbrook Reservoir until the Standedge Cutting is reached. Standedge Cutting was constructed as part of the third turnpike improvement of 1839 and, as TP3 provided an almost level route from Huddersfield to Marsden via Slaithwaite as well as a gentler climb out of Marsden, the TP1 and TP2 routes were quickly abandoned. TP3 is still in use today, carrying the current A62 Manchester - Oldham - Huddersfield - Leeds road.

The walk continues along the cutting to Brun Clough Reservoir. Just after the reservoir, turn left down a track, passing around the back of a spoil heap, around the base of Round Hill and on to Diggle Edge Farm. Turn right at the side of the farm and follow Boat Lane down to Diggle. Cross the railway at Station Road Bridge and continue for a short distance to the Diggle end of the Standedge Canal Tunnel. Original surveying errors resulted in this end of the tunnel being much higher than at the Marsden end. When the tunnel was reworked to the correct level, the side wall foundations were undermined and needed a complete re-build. The addition of the twin railway track tunnel in 1894 required the canal tunnel to be extended by just over 200 metres due to lack of space at the tunnel mouth, so the tunnel mouth you see today dates from 1893 and is not the original of some hundred years earlier. The tunnels were the only point on the railway where it was sufficiently level to locate water troughs for the steam engines to pick up water whilst in motion. These troughs were located just inside the tunnel entrance and their supply tank can still be seen adjoining the first railway tunnel.

From the railway bridge, turn left up a lane towards Harrop Green and then follow Ridge Lane to Dry Bridge where you turn left into the valley towards Dean Head which is thought to be the oldest domestic workshop and dyehouse in Saddleworth. The lane continues up to the A62 and crosses it to the "fold" of Bleak Hey Nook - this is a fine example of Saddleworth "folds" or hamlets consisting of stone built farm steads and weavers cottages pre-dating the Industrial Revolution. A short "out and back" detour to the site of the Castleshaw Roman Fort is possible from this point.

The main route turns right at this point to follow Whimberry Lee Lane past Standedge Foot to join the footpath up to Millstone Edge and the Pennine Way. Turning left (NW) along the Pennine Way will provide outstanding views across the plains towards Oldham and Manchester. However, the main route heads SE along the Pennine Way for a short distance to rejoin the route of TP1 (GR 017098) which is followed across wild (and often wet) moorland to Thieves Clough Bridge - almost certainly built by Blind Jack. The Standedge Trail then meanders around the Redbrook Spoils to rejoin the A62 at The Great Western Inn.

Turn left down the side of the A62 for a while before, with care, crossing the A62 to turn right in to Mount Road (TP1 again) just above The Carriage House. Continue along the side of Mount Road, passing Gilberts Cottages on the left, to where a grassy track heads off left (GR032101) around the Western flanks of Pule Hill. (The energetic may wish to tackle the steep ascent of Pule Hill for excellent views across the Pennine Moors). Follow the grassy track in a Northerly direction, noting a reed bed on the right that contours around the hill. Originally this was the course of a channel that provided water to drive the pumps etc. used during excavating of the canal tunnel. The path eventually leads back to the A62 at Owlers Farm, adjacent to a building that was originally The Coach & Horses Inn, subsequently became an Outdoor Pursuits Centre but was for sale at the time of writing (Dec 05).

Continue downhill (N) alongside the A62 to the right hand bend where a stepped path leads off to the left, descending steeply to Close Gate Bridge and the Packhorse Way (also known as Rapes Highway). From the bridge, turn right along the quiet lane (Waters Road) as far as the Tunnel End Inn. Opposite the pub, a narrow lane leads downhill to the Standedge Visitor Centre and Tea Rooms next to the entrance to the Standedge Canal Tunnel. From the visitor centre and tea rooms, a pleasant amble along the canal tow path leads back to the village station and car park.

In addition to the Tunnel End Inn passed near the end of the route, the Railway Inn opposite the car park welcomes walkers looking for refreshment. For those needing refreshment and who are also inclined to support local businesses, Marsden has its own brewery - The Riverhead - located next to the river in the centre of the village. Bracing Pennine air, tracing routes of historical interest and a village brewery to boot. What more could you ask ?

Maps Required : OS Explorer OL21, OL1 & 288. Alternatively, Marsden Information Point (located in the centre of the village) sell maps, based on OS 1:25000 maps, centred on Marsden. These fold down to about half post card size and eliminate the need to carry 3 OS Explorer sheets.

Guidebook to 40 walks in the Dark Peak area of the Peak District National Park. 35 circular routes for most abilities, from 8km to 19km, around Edale, Marsden, Fairholmes, Baslow and Castleton, including Kinder Scout and Mam Tor, and 5 longer (25km to 45km) routes highlighting the best of the Gritstone Edges, High Moorland and Deep Valleys.
More information

The South Pennines stretch from the northern boundary of the Peak District to the southern boundary of the Yorkshire Dales. Consisting of high rolling moorland, intersected by deep valleys, there is nowhere in this region that exceeds 2000 feet. The moors and valleys are where the old rivals, Lancashire and Yorkshire meet and where too the rival industries of cotton and wool. More Information