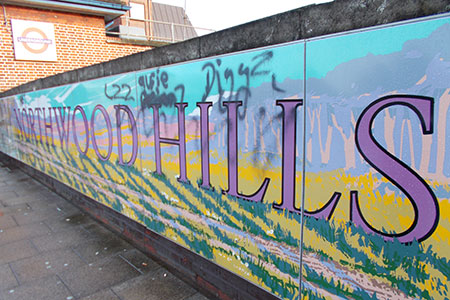 This linear walk links two tube stations in north-west London. Northwood Hills is on the Metropolitan Line and Northolt is on the Central Line. The route could be shortened since it passes close to other tube stations such as Ickenham and Ruislip Gardens. Sections of the Hillingdon Trail (HT) between Ruislip Lido (a lake) and the Dog Rose Ramble (DRR) between Golden Bridge and Northolt station are followed.

Exit Northwood Hills station and turn left down Joel Street. Turn right down Norwich Road, leading to Wiltshire Lane. At the end of the road, a public footpath leads downhill through woodland. At the foot of the hill, a high metal fence denies access to the northern end of the lake. Turn right to follow a path that follows the course of the miniature railway around the lake (Ruislip Lido) to emerge at the southern end of the lake, continuing along Reservoir Road.

Turn left at the next T junction, Ducks Hill Road, and cross the road with care. The next road on the right is Breakspear Road but signs for the HT appear next to the road indicating a green corridor that runs roughly in parallel with the road, passing through a residential area. Keep following the route ahead with signs for the HT appearing occasionally. At the second road crossing, Ladygate Lane, bear left past a school and then right along an alleyway, later crossing a field where the route goes sharp left. This leads to a lane to the right, but the HT goes left down a bridleway. When the route crosses a footbridge over a stream, bear right. This path soon comes to a fork. Take the left-hand track through woodland, shown as Clack Lane on Streetmap, leading to Hill Lane. At the next T junction turn right along Ickenham Road. Cross over this road and next turn left down Austin's Lane.

Note - one of the dropout points is here as Ickenham Station is nearby and West Ruislip Station is a little further away but in the opposite direction.

When Glebe Avenue appears on the right, leave Austin's Lane at this point to continue along a bridleway ahead with the sound of traffic from the A40 audible, and increasingly so, as you approach, and pass under, it as the track leads across Ickenham Marsh. Once past the motorway, HT signs indicate turns sharp right, sharp left, and sharp left again in quick succession, the latter leading down an alley and across a sports field via a tarmac path. Keep ahead to locate a turning to the left on exiting the sports field. Before reaching Lynhurst Crescent, take a path on the left that runs parallel to the road but behind a row of houses.

Note - there is also another path to the left of this one running alongside a stream, but this is not a good choice as it becomes impassable after a while due to overgrowing vegetation. At least that was the case in December 2019.

The path in parallel to Lynhurst Crescent initially runs along the back of a residential area but soon leaves that behind to enter Gutteridge Wood roughly due east for about half a mile before bending round to the right. Next it switches to the left and then, after a footbridge over a stream, to the right through Ten Acre Wood. If you take the first path on the right by the stream you then need to bear right and then left through Ten Acre Wood to reach the same point at Golden Bridge where the HT joins the DRR and the remainder of the route from here follows part of the DRR.

Follow Sharvel in an easterly direction Lane passing the West London Shooting School on the right. At the next T junction cross the busy A4180 at one of the traffic islands and then turn right. Turn left down Vanbrough Crescent passing Lime Tree Park on the right and then left into Compton Crescent. Leave this road via a footpath on the left that leads to a bridge over the Western Avenue. Continue along Islip Manor Road and then right through Islip Manor Park. Turn left along Mandeville Road to reach Northolt station and the conclusion of the walk.