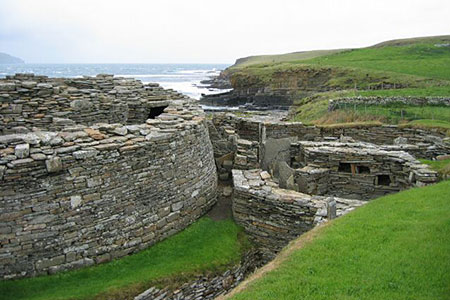 Caption - Midhowe Broch and outbuildings, Isle of Roussay, Orkney Islands, is one of many ancient relics to be explored on this walk.

The Orkney Islands are an archipelago with about 70 islands, of which 20 are inhabited. Kirkwall, the largest centre is situated on the largest island, Mainland. The islands have been inhabited for at least 8,500 years with many of the oldest and best-preserved Neolithic sites in Europe. Most of the islands are based on underlying Old Red Sandstone and are home to an abundant marine and bird life. The islands are mainly low-lying except for some sharply rising sandstone hills on Mainland, Rousay and Hoy where Ward Hill is the highest point in the islands. Dramatic, rugged cliffs can be found on some western shores and provide an added scenic attraction.