Ireland has much to offer walkers and the high ground of Co. Dublin and Co. Wicklow is no exception. Wild rounded hills and mountains form long ridges covered by moorland. Much of the area rises over two thousand feet (600 metres) and provide the basis for a wide variety of walks. Besides the grand beauty of the mountains the region is rich in heritage with some wonderful treasures of national importance. 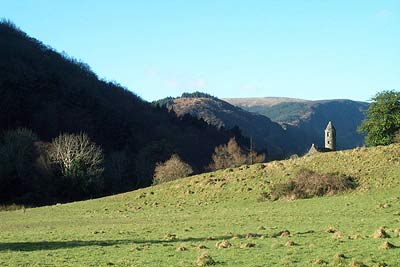 Once on the hills you have a feeling of solitude yet the bustling city of Dublin is less than an hours drive away, making it a convenient place to begin exploring Ireland's beautiful countryside. The major centre in the Wicklow Mountains is the Laragh, which is close to the small resort of Glendalough. Elsewhere the mountains and their associated valleys have low levels of population with only a few hamlets dotted across the area.

Relevant Maps - The Ordnance Survey of Ireland produce a series of eighty-nine sheets at a scale of 1:50,000 with some areas now been included in a companion 1:25,000 series. Detail is good with contours at 10 metre intervals and topography highlighted with coloured shading. Relevant maps for this area are sheets 56 and 62.

Notable Mountains & Hills - Throughout Ireland there are some 276 tops reaching 600 metres or more with 38 of these in the Wicklow Mountains. The highest peak in the region is Lugnaquillia, which at 925 metres makes it the thirteenth highest peak in Ireland. Besides the grander mountains the area has many smaller hills many of which are no less important despite their lesser stature - Great Sugar Loaf to the south of Bray being an excellent example.

Footpaths & Right of Access - Few footpaths are signed in the countryside and care needs to be exercised when crossing enclosed land. Open country is generally in private ownership and permission should be obtained from the landowner. Paths on the hills can be feint as there are fewer walkers than in comparative areas in England and Wales. Access in general is more problematic than for England, Wales and Scotland where rights of way and access lands are more clearly defined in law.

Long Distance Footpath - The Wicklow Way, which wends its way from north to south through the area is well signed with clear waymarks. It crosses some high land including one major summit en-route - Mullacor (657 metres).

Accommodation - There is a wide variety of accommodation from hotels and guests houses to bed and breakfast and hostels.