Cannock Chase is one of the smallest AONBs and because of the proximity of large conurbations and rich mineral reserves is also one of the most threatened. 'The Chase' was once a medieval royal hunting forest and despite its proximity to areas of high density population it remains surprisingly remote. 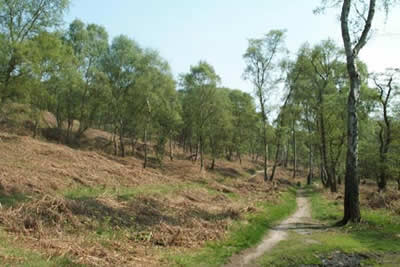 Located on the north western edge of the Birmingham and West Midlands, Cannock Chase is an area of high sandstone heather and bracken heathland with birch woodland and extensive pine plantations. The valleys are secluded and the whole area is rimmed by a gentler landscape of fine parklands, cultivated farmland and attractive villages.

Wild deer still roam the Chase and are a common sight when out walking. Much of the area including heathland, woodland and valley wetland habitats, are protected as Sites of Special Scientific Interest. The heaths are the largest surviving example of this habitat in the Midlands and support some interesting species of wildlife including the nightjar, adders and lizards.

The Chase saw construction of Prisoner of War Camps and today two Cemeteries (Allied and German) contain the graves of the fallen from two World Wars. Other points of interest include Castle Ring, an Iron Age fort, Shugborough Hall (the home of the late Lord Lichfield) and a visitor centre.

The Chase is criss-crossed by many footpaths and bridleways. The opportunities for walking are excellent especially if combined with one of the points of interest detailed above. In addition there are also signed Forestry Commission trails and the Staffordshire Way crosses the north-western part of the AONB. Despite the small scale of the area, when out walking the landscape gives the impression of being larger than it actually is. This helps the Chase accommodate the many people attracted by its scenery without it feeling too overcrowded.