The idea of developing the Cleveland Way began in the 1930 with the Teesside Ramblers' Association suggesting the creation of a long-distance path in north-eastern Yorkshire. The initial idea linked the Hambleton Drove Road with the Cleveland escarpment and coastal footpaths. A formal proposal was submitted in 1953 by the National Parks Commission with the trail opening in 1969, being the second National Trail to be opened. The Cleveland Way can be walked in either direction with Helmsley and Filey the ends of the trail. Like all National Trails the route is waymarked using the National Trail acorn symbol. 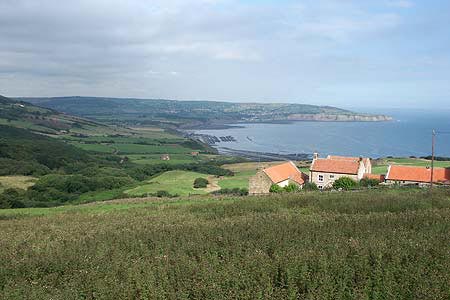 The trail can be divided into two sections. The inland section starts from Helmsley and then heads north and east around the western limits of the North York Moors National Park. This section does include some wild moorland walking which is open to the elements. The route then exits the National Park near Guisborough and continues to reach the coast at Saltburn.

The coastal section of the Cleveland Way then follows the Yorkshire coast in a southerly direction to re-enter the North York Moors National Park north of Staithes. The route continues to follow the coast from Saltburn to Whitby to cross the National Park boundary for the last time at Cloughton Wyke. Continuing south along the coast the route passes Scarborough to reach Filey. Like the inland section the walk along the coast can also be subject to weather especially if there is a persistent easterly or north-easterly wind.

A walking guidebook to the Cleveland Way and Yorkshire Wolds Way National Trails, plus the Tabular Hills Walk. Crossing the North York Moors National Park, coastal scenery and quiet countryside, the three routes can be joined to create an easy circular route of over 250 miles (400km). Includes a 1:25,000 scale OS map booklet of the Cleveland Way. - More information