The Clwydian Hills stretch for about 20 miles, rising between the Vale of Clwyd to the west and the Dee Estuary to the east. This line of undulating hills have steep slopes to their west providing excellent views as far as Snowdonia. In contrast to the moorland character of the summits the surrounding valleys are lush and green. 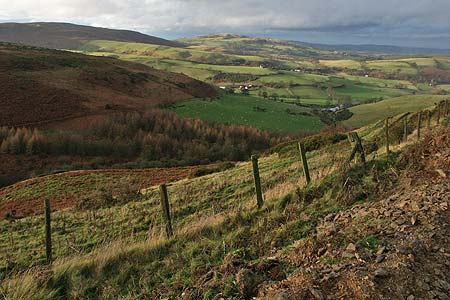 A wide variety of geology, which covers a wide range of geological periods, ranges form the Silurian rocks of the ridge to carboniferous limestone in the Alun Valley. The result of this geological variety is a wide range of distinct landscapes within the small area of this AONB. The heather moorland on the high ridge is in contrast to the hedged fields and coppiced woodland of the lower slopes and valleys. The limestone rocks are exposed in places adding to the scenic interest.

The Clwydian Hills is rated highly by archaeologists with a superb series of Iron Age hill-forts crowning its summits. In fact this is the largest concentration of hillforts in Western Europe with six forts on the crest of the ridge. This rich heritage has resulted in part of the Range being listed in the Register of Landscapes of Outstanding Historic Interest in Wales. In terms of natural habitat, the AONB's heather moorland and 'ffrith' are protected as a diminishing habitat resource.

Much of the land within the AONB is in private hands although the high moorland is largely publicly owned. Land use varies from hill sheep farming to the mixed dairy, cattle and arable farms in the surrounding valleys. Mineral extraction, including limestone and sand and gravel is important to the local economy. Another source of income is commercial forestry. There are no towns of importance within the AONB although there are a number of attractive villages with many houses built from local stone.

Many people pass the Clwydian Hills on their way to Snowdonia and the North Wales Coast. However the AONB receives large numbers of visitors, particularly at its two country parks (Moel Famau and Loggerheads). The Offa's Dyke National Trail, running from Chepstow to Prestatyn (which lies just outside the area boundary) follows almost the entire length of the ridge. In addition excellent waymarking of footpaths and bridleways provide many options for circular walks to suit everyone's abilities.