Guernsey is one of the most southern parts of the British Isles. The Bailiwick of Guernsey, which comprises the inhabited islands of Guernsey, Alderney, Sark, Herm, Jethou, Brecqhou and Lihou, is a Crown Dependency and does not form part of the United Kingdom or the EU. Together, the Bailiwicks of Guernsey and Jersey are known as the Channel Islands, and are located in the English Channel. Although Guernsey is very much closer to France the residents consider England to be the mainland. 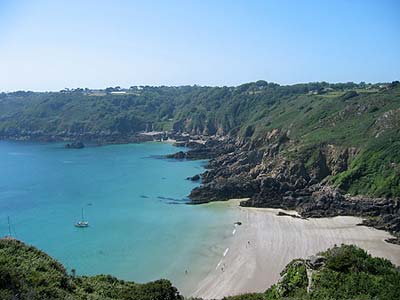 Although approximately 65,000 people live on the seventy-eight square kilometres that make up the Bailiwick there is plenty of opportunity to enjoy a wide variety of walks. In Guernsey there are fascinating townscapes, spectacular countryside, long sandy beaches to the north west and rugged sea cliffs in the south.

Along with the other Channel Islands Guernsey was occupied by German forces in the Second World War. In October 1941 orders were given that the islands be permanently fortified as part of the Atlantic Wall. Remnants of the massive building work that was completed during the following two and a half years before the islands were effectively isolated after the D-Day landings form interesting land marks around the coast.

For those who relish a challenge the round Guernsey walk to raise money for charitable causes takes place annually in June. The route follows the coastal paths as close to the edge of the island as is possible and gives a walk of approximately 40 miles.

Maps - The British Grid does not extend to the Channel Islands. In Guernsey locals rely on the Perry's Guide available from book shops to broadly indicate locations. Book shops in the island also stock the official Guernsey wall map published by the States of Guernsey, the legislative and governing body of the Island, which with a scale of 1:25000 is the nearest thing to an Ordnance Survey map of Guernsey.