Situated east of the Lake District, the Howgills lie mostly within the boundaries of the Yorkshire Dales National Park. The Howgills are one of the forgotten walking areas in England. The "hippo like" outlines of the fells are distinctive, most often seen by those tearing up the M6 motorway between Kendal and Penrith. Despite the lack of crags it is great walking country and you can wander for hours in the knowledge you are unlikely to meet more than a handful of other people. Poor parking (except in Sedbergh and a few other areas) helps to keep the number of people wandering the Howgills to a minimum. 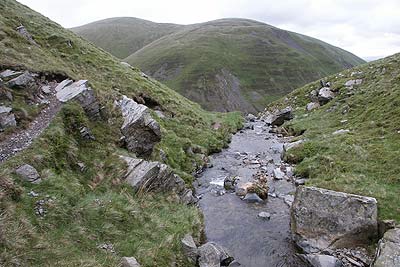 The area covered by the Howgills can be defined by the M6 to the west, the A683 from Sedbergh to Kirkby Stephen in the south and east and the A685 from Tebay to Kirkby Stephen in the north. It must also be stated at this point that the complete range falls within the boundaries of the Yorkshire Dales National Park. To gain an overall impression of the range drive about two miles east from Sedbergh on the A684 towards Hawes. A large car park on the right provides a brass plate detailing the various fells and the famous falls of Cautley Spout.

The highest point of the range is the Calf (altitude 2217ft/676m) from which radiate a complex series of ridges like spokes on a wheel. (Beware - these can be difficult to navigate in poor weather.) The deep valleys between the ridges are almost deserted apart from sheep and the occasional wild pony. The longest of these valleys lie to the north of the Calf with Bowderdale the most impressive at almost four miles long.

Another point of interest, visible from the M6 motorway, is Black Force where Little Ulgill Beck tumbles down a superb ravine. Apart from isolated points of interest such as this and Cautley Spout, the Howgills have little interest underfoot. Smooth grass cover makes walking fast and delightful. The reward for scaling the heights comes from the superb views of the Northern Pennines, the eastern fells of the Lake District, and the higher peaks of the Yorkshire Dales.

The Lune Valley and Howgills - A Walking Guide

A guidebook to 40 walks, from 3 to 11 miles, exploring the Lune Valley and Howgill Fells, some of the most unspoilt countryside in northwest England. Set between the Lake District and the Yorkshire Dales and two other AONBs, the walking is hugely rewarding, near the centres of Sedbergh, Kirkby Lonsdale, Kendal and Lancaster. - More information