The Isle of Wight is much bigger than a lot of people think: 24 miles from east to west and 14 miles north to south. Its 60 miles of coastline contains a wide variety of landscapes, from chalk downland to sandy beaches via marshes, salt flats and ancient woodland. Inland the rolling downlands provide some superb walking. 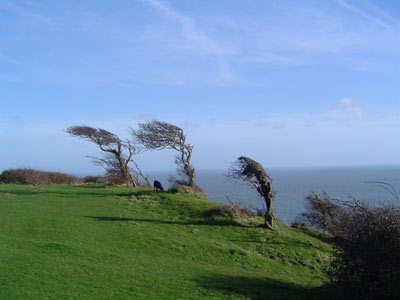 The Island's best-known landmarks are the Needles, those chalk stacks that form the western end of the downs that run from east to west. Close by are the coloured sands of Alum Bay, beloved of many a souvenir-seeker over the years. And it is the western end of the Island that attracts the most walkers, not without good reason: the west side, or the "back of the island" as it is referred to locally, is generally much less built up than other areas. Indeed, a large part of south and west Wight is designated an AONB, in recognition of and to help protect its special charms.

One of the most popular areas for walking in west Wight is on the downs just inland from the Needles. West High Down and Tennyson Down are both owned by the National Trust, and afford spectacular views over the island and across the Solent to southern Hampshire. Tennyson Memorial, at the summit of the latter, celebrates the poet's connection with the area. (He lived at Farringford House, near Freshwater).

Further south, but still on the western edge of the Island, another patch of National Trust land is home to the Long Stone, the remains of a Neolithic long barrow and one of the few ancient monuments on the Island. It sits atop Mottistone Down, behind the Trust-owned Mottistone Manor, the gardens of which are well worth a stroll around if you fancy a break from the serious walking. (More importantly, there's also a very nice cafe there!)

Further south still, towards the seaside resort of Ventnor, walkers will encounter the Undercliff, one of the Island's most beautiful stretches of landscape, running for seven miles from Dunnose to Blackgang. The Undercliff is actually a series of collapsed terraces between inland cliffs and the sea, a result of this area's unusual and unstable geological make-up which has seen several properties in the area rendered virtually unsellable.

The Undercliff forms just one section of the 60-mile Coastal Path, a well waymarked route that is understandably popular with visitors. Those attempting it will be rewarded with a rich variety of coastline, but they should be prepared for some challenging climbs and the odd diversion as coastal erosion does its remorseless work. The only section where the Coastal Path comes seriously inland is the part that skirts close to Osborne House in East Cowes, near the top point of the diamond-shaped Island.

One major benefit of tackling the Coastal Path is that it takes walkers to the often overlooked eastern edge of the Island, where villages such as Seaview, St Helens and Bembridge still retain bags of nautical charm. If you find yourself over on this side of the Island, look out for the RSPB nature reserve at Brading Marshes. Further north, the Coastal Path will also bring you to Newtown Creek, a fantastically evocative landscape and also a birdwatchers' paradise.

If you fancy seeing more of the Island's interior, you could time your visit to coincide with "Walk the Wight", the organised charity event that takes walkers from the Island's eastern to its western tip along the chalk spine of the downs, with great views to keep you company along the way. This takes place every year in May.

One more thing for potential Wight walkers to consider is the cost of the car ferries: it can be quite expensive to bring your vehicle over in the height of the season, so it might be worth considering coming over as a foot passenger and then making use of Island's public transport network. A regular train service runs back and forth from Ryde to Shanklin, stopping at Brading, Lake and Sandown, while buses can be used to get to most other parts of the Island - visit www.islandbuses.info for routes and timetables.

Walking on the Isle of Wight

Guidebook to 33 walking routes on the beautiful Isle of Wight, from 4 to 18 miles long. The routes are suitable for all abilities and are accessible all year round. Includes a complete circuit of the island's spectacular coast as well as walks exploring forest trails and downland, and visiting the towns of Yarmouth, Cowes and Ventnor. - More information