This AONB, the second largest in area, covers some wild and remote landscapes in northern England. The area is dominated by the Pennine hills and includes large areas of undulating heather moors and peat. 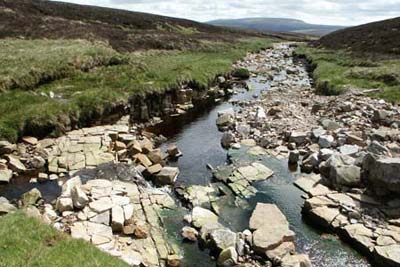 On its western edge, the plateau drops steeply into the Eden Valley with its patchwork of fields. The highest point in the Pennines is the table-top summit of Cross Fell (890m). The high land of this area is the source of a number of major rivers including the Tyne, Tees, Wear and Derwent. Like most of the AONBs, the North Pennines has diverse fauna and flora that reflects the wide range of habitats.

Sheep farming remains important to the local economy with grouse shooting on the moors adding income to the region. Quarrying of limestone and the mining of minerals remain important sources of income for the region and its inhabitants. Lead mining has declined with the area once the most important area in the world for this activity. However the abandoned lead mines are now part of the area's heritage and are seen by many as an intrinsic part of the landscape.

Major areas of population are few and far between with Allendale Town and Alston the largest. Stone built villages are scattered throughout the area and have seen a decline in their population since the demise of lead mining. However tourism is beginning to redress the balance and with inward migration the villages are beginning to recover.

From a walker's perspective, the North Pennines have much to offer. The large tracts of open moorland see few walkers and make an ideal venue for those requiring solitude. Cross Fell and its adjacent high fells on the main Pennine ridge offer hill walking of the highest quality. The Pennine Way National Trail follows substantial parts of this ridge, together with a very interesting section of Teesdale. Although the higher land grabs the headlines, virtually every part of this AONB from valley to summit has something for walkers. Rivers, waterfalls and moors combine with picturesque villages and industrial heritage to provide walks that are full of interest.

Great Mountain Days in the Pennines

An inspirational guidebook to 50 classic walks on the rolling Pennine landscape. The graded routes, between 6 and 13 miles in length, cover classic Pennine fells and moorland such as Whernside, Ilkley Moor and Pendle Hill; exploring the North and South Pennines, Yorkshire Dales, Howgills and Dark Peak. Many routes are also suited to fell running.
More information

Walking in the North Pennines

This guidebook describes 50 day walks across the North Pennines, England's remotest Area of Outstanding Natural Beauty taking in parts of Cumbria, County Durham and Northumberland. Most of the routes are circular and they range from 5 to 14 miles, with something to suit all abilities. Route descriptions are accompanied by 1:50K OS mapping.
More information