The Peak District National Park suffers from a split personality with its contrasting White and Dark Peaks. Within easy distance from Manchester, Sheffield and the Midlands there is much for the visitor to see. The contrast between quiet limestone dales and wild upland moors provides the basis for a diverse range of walks within this National Park with scenic variety the keynote. 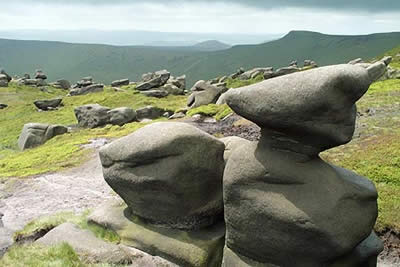 Designated Britain's first National Park in 1951, the area has two distinct landscapes. In the south are the gently rolling hills of the limestone White Peak. To the north, west and east are the wild, heather-clad moorlands of the Dark Peak peat bogs, superimposed on millstone grit. Predominantly in Derbyshire, parts of the national Park also extend into the neighbouring counties of Staffordshire, Greater Manchester, Cheshire, South Yorkshire and West Yorkshire. The Peak District offers the most easily accessible high ground to my home in Stafford. It is a complex area and unusually many centres of population are located within the Park boundaries.

THE WHITE PEAK - The main centres for walking are the many villages spread across these rolling hills. Hartington, Ashford in the Water, Youlgreave, Monyash, Longnor, Ilam and Tissington are all perfect bases for relaxed walks in the area. Each of these villages has something to offer the visitor as well as being a good base for walking. Unless there has been recent rain, main paths are well surfaced and unlike the dark Peak you should return with dry feet. The valleys themselves are well known - Dovedale (Ilam to Hartington) and Lathkill Dale (Monyash to Youlgreave) being particularly popular. However a word of warning! Many dales change their name as they progress through the countryside. What starts as Monsal Dale, soon becomes Cressbrook Dale, and later undergoes further name changes as you work upstream, which leads to confusion!

One of my favourite villages is Longnor, just inside Staffordshire. Half White and half Dark Peak in character, the village itself has plenty of character. Unspoilt by commercial pressures, it has all the charm of rural Staffordshire. Close by is Chrome Hill. The remains of a coral reek this dinosaur-like hill offers an excellent scramble with just a feeling of exposure!

THE DARK PEAK - a complex area of high land best studied in four distinct areas. Although the underlying gritstone is hard and enduring, the thick layer of peat covering the area can be energy sapping. After heavy rain paths can be waterlogged, requiring frequent diversions into banks of drier heather. The best time for walking is either at the end of dry spell in summer or after a heavy frost in winter.

The Western Area - this distinct area to the west of Buxton crosses the boundaries of Cheshire, Staffordshire and Derbyshire. It contains the highest point in Staffordshire (Oliver Hill near the village of Flash) and the highest land in Cheshire on the summit of Shining Tor (a surprising 1833ft or 559m for a county which such a "flat" reputation). Like most upland moorland, there is little variety in the scenery although you can maintain a fast pace in dry conditions. Highlights include Three Shires Head where the three counties meet, the ridges around the Errwood and Fernilees Reservoirs (including the summit of Shining Tor) and Shuttlingsloe, which is also referred to as the Cheshire Matterhorn because of its pointed shape!

The Northern Area - wild and untamed the area north of the A57 Glossop to Sheffield road contains some of the worst peat imaginable. However it is still a rewarding area to visit. Black Hill and Saddleworth Moor do have some areas of charm especially where the gritstone outcrops on the "edges". Once height is gained the edge paths offer excellent walking with panoramic views guaranteed. Black Hill, crossed by the Pennine Way, must have the worst peat bogs in the area, with the summit almost inaccessible through thigh-deep, black, wet, peat! Bleaklow often has a reputation for being unyielding moorland. However it is a wild place to be and is worth the effort for those who require some solitude. Of particular note are the massive landslides at Alport Castles, the edges above Dovestone Reservoir near Saddleworth, and Laddow Rocks north of Crowden.

The Edale Valley - the most popular area in the Dark Peak for walkers, it contains the Kinder Plateau to the north of Edale, and the Castleton Ridge to the south of the valley. The village of Edale is the southern terminus of the Pennine Way and is a perfect base for walks in this area. The Kinder plateau is exactly what its name suggests - an area of flat land around 2000 feet above sea level with up to 12 feet of peat covering the gritstone. Almost all the way around the plateau the underlying gritstone outcrops forming "edges" that provide excellent walking and brilliant views down into the surrounding valleys. One superb place to rest awhile is the Kinder Downfall - a waterfall that plunges over the edge. Exposed to the westerly winds, there are days when the water goes up rather than down! The Castleton Ridge includes Mam Tor and is another area where massive landslides have left their mark - to the point of closing the main road into Castleton from Chapel-en-le-Frith.

The Eastern Area - working north to south the area east of the Derwent and Ladybower reservoirs offers good moorland walking with excellent views. As for most of the area it can wet underfoot. Of particular note are the rocky tors which have some wonderful names - the coach and horses being particularly apt. From the A57 south, a chain of edges runs almost as far as Chatsworth House. These include Stanage Edge, Froggatt Edge, Burbage Rocks and Curbar Edge. Once height is gained these edges offer excellent level walking and good views. Of particular interest are the discarded millstones, left half finished when the market disappeared. Finally in this section is Abney Moor - worth a visit if you have time although its not as wild as the other areas in the Dark Peak.

Guidebook to 40 walks in the Dark Peak area of the Peak District National Park. 35 circular routes for most abilities, from 8km to 19km, around Edale, Marsden, Fairholmes, Baslow and Castleton, including Kinder Scout and Mam Tor, and 5 longer (25km to 45km) routes highlighting the best of the Gritstone Edges, High Moorland and Deep Valleys. - More information