The Pembrokeshire Coast National Park is Britain's only truly coastal national park. Rimmed by a spectacular waterscape of rugged cliffs, sandy beaches and wooded estuaries, the land rises to wild inland hills. This environment is a place of sanctuary for wildlife who share the landscape that has been shaped by many people over the centuries. Tombs and castles, crosses and cottages, quarries and quays are all reminders of man's endeavours, which remains a working landscape. Inland the Preseli Hills offer excellent walking across the moorland ridge. 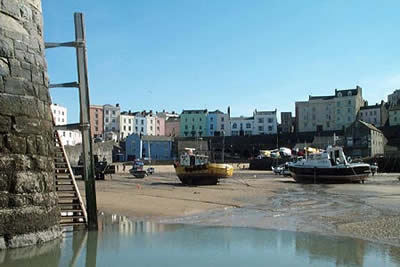 The Pembrokeshire Coast National Park is one of the smallest National Parks in England and Wales. Predominantly coastal, it includes several offshore islands which are of international importance in respect of their seabird and seal populations. The largest islands are Skomer, Skokholm, Ramsey, Grasholm and Caldey and these add to the character of the coast.

The coastline is varied and ranks amongst some of the most beautiful in Europe. High cliffs, long stretches of open beaches, sheltered coves and harbours intermingle with mud flats and dunes. Inland the landscape is equally interesting with the broad waters of Milford Haven contrasting with the wooded slopes of the Gwaun Valley. To complete the picture the Preseli Hills in the northern sector of the park offer windswept moorland hills with superb views. Great stones were quarried from these hills and transported to Wiltshire - where Stonehenge reminds us of man's ingenuity.

Like much of Wales the Celtic culture is an important aspect of life in Pembrokeshire with Welsh spoken in many communities especially in the northern part of the Park. Stone walls rather than hedgerows provide texture to the landscape and the rolling countryside outside of the Park's boundaries does little to diminish the overall beauty of the area.

One of the highlights is Wales' first long-distance footpath - the Pembrokeshire Coast Path National Trail - which wends its way from Amroth in the south to St Dogmaels in the north. Some 186 miles (299 km) in length it includes some spectacular coastal scenery and seascapes. First opened in 1970, most of the route lies within the Pembrokeshire Coast National Park and the National Park Authority maintains the path with financial assistance from the Countryside Council for Wales and the European Union.

The entire route of the Pembrokeshire Coast Path is a superb challenge to the walker, especially when the 35,000 feet of ascent and descent are taken into account! However those with less energy can opt to enjoy shorter sections perhaps combining an inland section of footpath to construct a circular walk.

Luckily Pembrokeshire is devoid of large urban areas and areas where commerce has infringed on the landscape, such as near Milford Haven, are excluded from the National Park. One of the "gems" is Britain's smallest city - St Davids - where a beautiful cathedral dating from the 12th century is well worth a visit. Elsewhere there are constant reminders of our heritage with Iron Age forts, medieval castles and many other items all reminding us of the people that occupied this land.