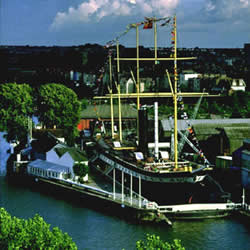 Caption - The SS Great Britain was the first iron, propellor-driven ship to cross the Atlantic. Designed by Brunel, and launched in 1843, this magnificent ship made voyages to New York and Australia and saw war service in the Crimea. Abandoned in the Falkland Islands, she became a store ship and just escaped being used by the Navy for target practice. She was brought back to Bristol and restored in 1970, and can be visited in her original dry dock.