The Brecon Beacons National Park covers a wide area in South Wales. The high summits of the Beacons themselves tell only part the story as, like most National Parks, there is a varied range of scenery to be enjoyed within its boundaries. 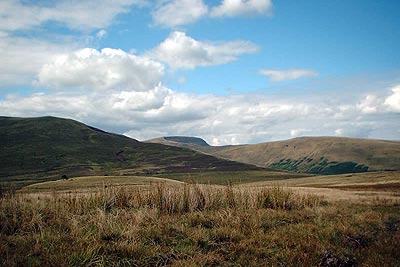 This National Park is one of three in Wales and was established in 1957. Centred on the Brecon Beacons, it contains some of the most spectacular and distinctive upland formations in southern Britain and covers an area of 1347 sq km (520 sq miles) between the Wales-England border almost all the way to Swansea. The diversity of its terrain provides a varied range of landscapes from high mountain moorland to small villages nestling in valley pastures.

Much of the interest for walkers is concentrated on the high ground within the National Park. There are four mountain ranges: the Black Mountain (to the west), Fforest Fawr, the Brecon Beacons and the Black Mountains (to the east). Much of the area consists of high, open country with smooth grassy slopes lying on red sandstone. On the northern edge there are steep escarpments whilst on the southern rim there are limestone crags, wooded gorges, waterfalls and caves.

Each of the four mountain ranges has its own distinct character. In the west of the remote Black Mountain is surrounded by wild open country in a grand scale. There are sheer limestone cliffs and impressive views can be enjoyed from the higher ground.

Forest Fawr (the name is derived from ancient times as a hunting ground) is an area offering a wide variety of walks with lush countryside and sparkling waterfalls. In addition the high ground to the north offers quiet walks across rolling open country with views east to the Beacons and west to Black Mountain.

The highest point in the Brecon Beacons National Park is Pen y Fan at 2907 ft (886 m.). This is one of the 'Beacons' or sites where ancient signal fires were lit. The views north are superb as you gaze into Mid Wales from the top of the great cliffs of the escarpment. Pen y Fan's distinctive flat-topped summit is a very popular walk from Storey Arms on the A470. Far more interesting routes are possible!

At the eastern end of the National Park lie the Black Mountains (not to be confused with the Black Mountain in the west). These form the border between England and Wales. Long high ridges provide excellent hill walking whilst the valleys provide less demanding but equally enjoyable walks. Hay Bluff (2221ft - 677m) is a typical hill offering superb views across the Wye Valley and across the border country.

Three long distance trails run through the Park. The new Beacon Way was opened in 2005 and provides a 100 mile (160 km) route for serious walkers. It starts in Abergavenny and runs the length of the National Park to end in Llangadog. The Offa's Dyke National Trail passes along the eastern boundary of the Park affording a high level route over relatively easy terrain with fantastic views over the Welsh Marches. The 55 mile (93 km) Taff Trail joins Brecon to Cardiff and has a circular option for walkers around the Central Beacons area.