The Chilterns lie only a few miles to the north west of London and yet they are a beautiful, unspoilt corner of England. The gently rolling hills are swathed in woodland and chalk downland and in quiet valleys attractive villages with their traditional brick and flint cottages nestle around medieval churches. The most dramatic feature of the area is the chalk escarpment, a ridge running south west to north east, which rises up steeply from the Vale of Aylesbury and slopes gently south east towards London. This underlying chalk geology gives rise to clear chalk streams which are home to valuable wildlife. 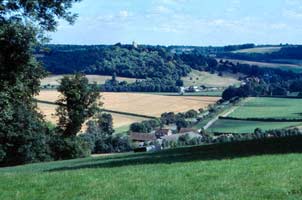 The mosaic of fields, hedges, woods, sunken lanes and streams creates an intimate landscape of enormous variety and charm. Prehistoric trackways such as the Ridgeway and the Iron Age forts scattered along the hills give a sense of the ancient history of the Chilterns. For thousands of years people and goods have travelled along the natural highway provided by the hills. Today, millions enjoy the extensive network of footpaths and bridleways that criss-crosses the area.

With two National Trails and over 2000km of footpaths and bridleways the Chilterns is a fantastic area to explore by foot. Getting out of the towns and onto the well-signposted paths is one of the best ways of appreciating the beauty and tranquillity of this lovely countryside.

Across the whole area there are promoted walking routes which you can follow using individual printed guides and rights-of-way markers. The routes vary from 1.5 miles to 10 miles and there are ones to suit all abilities from keen walkers to those with limited mobility. Some of the walks start and finish at train stations and town centres, making it easier to enjoy a day out without the car. Within a relatively short distance you can enjoy both the drama of a viewpoint on the hills and the peace of a quiet valley far from traffic.

For those who appreciate a longer hike there are two long distance routes in the Chilterns: the Ridgeway and Thames Path National Trails. The Ridgeway follows the spine of the hills, ending at Ivinghoe Beacon near Tring. This is an ancient route, in use for around five thousand years by people travelling from South West England to East Anglia. Today it provides several days of very enjoyable walking through the Chilterns, with plenty of opportunities to stop at country pubs for refreshment. Along the southern boundary of the Chilterns the Thames Path National Trail provides gentle walking and lovely vistas of the Thames Valley.

While out and about you may well spot some of the abundant wildlife in the area, including the now familiar red kite, a spectacular bird of prey that was re-introduced over 14 years ago and is now frequently seen soaring overhead. Bluebell woods in late April and chalk downland covered in wildflowers in the summer are two other unmissable spectacles in the Chilterns.

There are some well-established countryside sites with plenty of space for walks and picnics as well as toilet and information facilities. Dunstable Downs in Bedfordshire, the National Trust Ashridge Estate in Hertfordshire, Wendover Woods in Buckinghamshire and the Warburg Wildlife Reserve in Oxfordshire are all attractive and popular sites.

A guidebook to 35 walks in the Chiltern Hills of southern England. These chalk hills and ancient woodlands stretch from Reading and the Thames valley through Oxfordshire, Buckinghamshire and Hertfordshire to Luton. Walking in the Chilterns - an Area of Outstanding Natural Beauty - for walkers of all abilities, with walks from 4 to 12 miles long. - More information