The South Downs is Britain's newest National Park and stretches from Winchester to Beachy Head. Steeped in history there are ancient hill-forts, barrows, a Roman road and deserted medieval villages. The area has a rich diversity of natural habitats including flower-studded chalk grassland, ancient woodland, flood meadow, lowland heath and the particularly rare chalk heathland. This varied environment provides an excellent basis for those who enjoy outdoor pursuits, such as walking, cycling and horse riding. 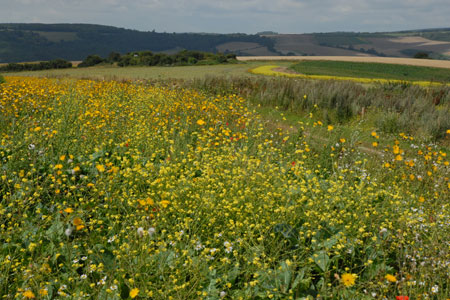 The South Downs became Britain's newest National Park on 31st March 2010. It is the tenth National Park in England. As with all the National Parks the prime purpose of the Authority is to conserve and enhance the natural beauty, wildlife and heritage. In addition a further responsibility is to promote opportunities for the understanding and enjoyment of the special qualities of each park. Unlike many countries where large tracts of wilderness are protected, in Britain the landscape is mostly farmed and people live and work within the boundaries shaping and developing the countryside.

The South Downs National Park is over 1,600 sq.km. and stretches about 100 miles from the edge of Winchester in the west to Beachy Head in the east. The geology consists of the greensands and clays of the Weald and with the chalk of the Downlands. This geology provides a basis for large tracts of important ancient woodlands, open heaths and the famous downs that lead to the sheer cliffs at Seven Sisters and Beachy Head.

The landscape supports a variety of trees, plants, birds and other wildlife including ancient beech and oak trees, nightjars, the insectivorous Sundew plant, rare orchids, the beautiful Adonis Blue butterfly and the seldom-seen adder.

Some 108,000 people live in the Park. The main centres of population include the towns of Petersfield, Midhurst and Lewes. Of more significant note is the large number of people who visit the area from nearby coastal towns and major cities such as Brighton, Chichester and Eastbourne. A significant source of visitors is also London, which is less than one hour away.

For walkers the varied landscapes forms the basis for walks to suit all tastes with plenty of variety and interest in all routes. On e major National Trail, the South Downs Way, crosses the park from east to west and offers some wonderful views, plenty of historical interest and varied wildlife.

Guidebook with 40 circular walks throughout the South Downs National Park, exploring the beautiful chalk hills between Eastbourne and Winchester. The walks range from under 5 miles to 11 miles, including Beachy Head and the Seven Sisters, Ditchling Beacon and hundreds of prehistoric sites. Accessible all year, but wild flowers best in spring. - More information