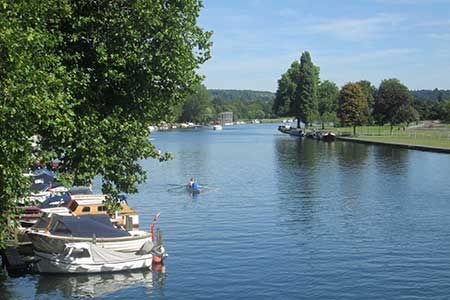 The Thames Path National Trail follows the River Thames from its source near Kemble in Gloucestershire to the Thames Barrier, south east London. 184 miles (296 km) in length it was opened in 1996 despite the initial idea being proposed as long ago as 1948. The whole of the route is open for walkers with some sections shared with cyclists.

For most of its length, the Thames Path follows the original towpath. However there have been some detailed amendments to the route where it is impractical to keep to the original route. Recent flooding in the Thames Valley has hit the headlines and it must be remembered that some sections of the path may be under water due to heavy rain. On the tidal sections of the river downstream from Teddington Lock, localised flooding may also occur when there are unusually high tides.

Most commentators divide the Thames Path into five sections -

Thames Head (the river's source) to Oxford. This 54 miles (87km) section crosses mainly rural and agricultural lane. In some places the Thames Path is some way from the river.

The 51 miles (82 km) between Oxford and Henley-on-Thames (51 mi or 82 km) passes through a number of towns and villages including Abingdon, Wallingford, Streatley and Reading. There are several places where the route leaves the river in residential areas. The path also crosses the river at a number of points.

On the 23 miles (37 km) section from Henley to Windsor the path passes through Marlow and Maidenhead with some diversions away from the river.

The next 28 miles (45 km) from Windsor to Richmond has much of interest including Windsor Great Park, Runnymede and Hampton Court Park. Once again, the path is diverted away from the river in some residential areas.

The final section is from Richmond to the Thames Barrier. At 28 miles (45 km) the path passes through urban areas. However, Kew Gardens, the Wetlands Centre at Barnes and Battersea Park offer some respite from built up areas. For much of this section there is a 'Thames Path' on both sides of the river. As might be expected diversions away from the river bank are frequent especially after passing the Houses of Parliament.

A guidebook to walking the Thames Path, a National Trail covering 180 miles between London's Thames Barrier and the river's source in Gloucestershire, passing through Windsor, Oxford and rural countryside. Provides full information for this easy riverside route that takes around two weeks to complete. Includes a 1:25K OS map booklet.
More information