The Yorkshire Wolds are chalk hills that run in an arc from west of Hull to the North Sea coast south of Bridlington. At their eastern end the Wolds produce the high cliffs rising to 420 feet above the sea east of Speeton. To the south the Yorkshire Wolds continue across the River Humber to the Lincolnshire Wolds which have a similar geological character. Most of the Yorkshire Wolds lie in the county of East Yorkshire although some of the hills at western end are in neighbouring North Yorkshire. 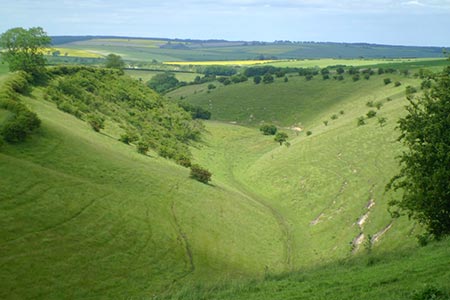 Their main feature is a gently rolling plateau which has been cut into by many deep, steep-sided and flat-bottomed valleys. The underlying chalk provides exceptional drainage, so most of these valleys are dry. The highest point at Garrowby Hill (800 feet) is situated in the western Wolds northeast of Bishop Wilton beside the A166. To the north the hills have a steep scarp to the Vale of Pickering offering views across this wide plain to the North York Moors.

Coastal walking in this area at is superb with Flamborough, Bempton and Filey with their high cliffs providing many dramatic walks. In season these cliffs are home to many nesting seabirds. The Flamborough Headland in particular is worth exploring and is designated a 'Heritage Coast'. Elsewhere there are many walks following the beautiful deep valleys passing through some delightful villages along the way. Generally, the walking is easy with expansive views and big skies once the undulating plateau is reached.

A walking guidebook to the Cleveland Way and Yorkshire Wolds Way National Trails, plus the Tabular Hills Walk. Crossing the North York Moors National Park, coastal scenery and quiet countryside, the three routes can be joined to create an easy circular route of over 250 miles (400km). Includes a 1:25,000 scale OS map booklet of the Cleveland Way. - More information