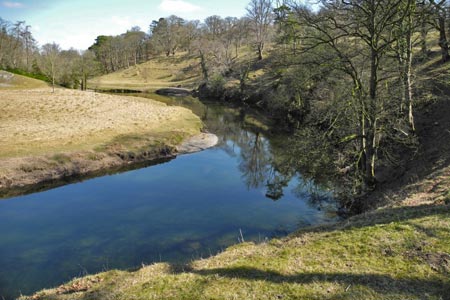 There is parking at a large lay-by on the "old" A6 which heads north from a junction just north of Levens Bridge but be careful to park within the layby, as there are double white lines along the road here (Grid ref. SD496854). Get there early!

To start this Lake District walk, head down to Levens Bridge and take the footpath on the south side of the river - the one on the north side is your return route. You are now in Levens Park and there is an information board and map. Follow this way-marked path with the river below on your left, climbing gradually and bearing left to walk along the avenue of mature oak trees. Keep an eye out for the Black Fallow deer which inhabit the park.

At the end of the avenue bear right through a gate and up to a minor road. (Grid ref. SD 506862) Turn left and cross the bridge over the busy A590. Just after the bridge take the signed footpath on the right heading uphill and bearing left, cross the style and head north east with the field boundary on your right. The canal is completely filled in but you can just make out its course, and you will soon see the first of many redundant bridges which are the only evidence of the former canal.

Go through the gate under the bridge and from here on it is easy to follow the way-marked canalside route. The fine house with clock tower down to your left is Sedgwick House, built in 1868 for William Henry Wakefield, architects Paley and Austin. It is now private residential apartments. You pass over a bridge at the village of Sedgwick, if you appreciate engineering take time to go down to street level and admire the construction of this bridge.

Continue along the course of the canal, passing a number of redundant bridges surrounded by meadows, until you eventually come out onto Natland Road just south of Kendal (Grid ref. SD 518905). Across this road and diagonally left take the cycleway/footpath into Kendal. This is also part of the canal route and takes you into the town but away from the traffic, though there are two roads to cross.

After passing the electricity supply depot on your left, the path opens out to a grassed area and there is a track diagonally to the left which passes between buildings to a street. Turn right, then left to reach the main A6 southbound on the east bank of the river, almost opposite the magnificent Kendal Parish Church.

To reach the church (or the Ring O' Bells pub next door) turn left and head south to cross the river at the road bridge, then head north again.

After exploring the town, from the church head south on the A6 Milnthorpe Road but do not cross the river. Bear first left into South Road and left again to take the riverside path heading out of the town, looping round the sewage treatment works, with the Roman camp on the opposite bank. Climb up the bank into Scroggs Wood (Woodland Trust), following the course of the river on your left.

Leaving the wood at a minor road, take the path opposite to cross meadows, regaining the riverbank further on. Continue along this pleasant riverside path until it meets Hawes Lane, where you go straight on to Hawes Bridge (Grid ref. SD 512891) Here you cross the river and continue south on the east bank as far as a narrow footbridge. (Grid ref. SD 509875)

Here you can either stay on the east bank and head south to cross at the next road bridge, or cross at the footbridge and head south along the lane, turning left at the junction with the minor road. On reaching the next bridge, take the lane on the west bank (river on your left) which takes you down and under the massive A590 road bridge which spans the River Kent. Climb up to the lane and after 200 yards take the signed path on the left, skirting a woodland on the left to re-enter Levens Park via a gate set high in the wall.

It is now a leisurely undulating stroll back through the grounds of Levens Park, exiting onto the A6 back at Levens Bridge.

There are plans to restore the upper reaches of the canal. For more information contact The Lancaster Canal Regeneration Partnership.