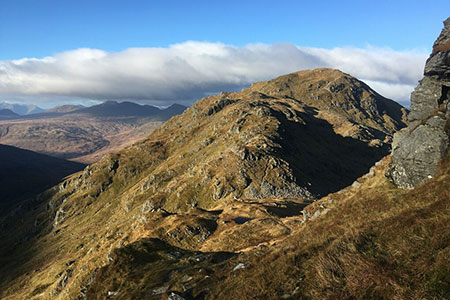 This walk describes the three Munros Beinn a' Chroin, An Caisteal and Beinn Chabhair using a longer and less frequented approach from the Balquhidder side. A long walk but on a fine day nothing of any technical difficulty with a few steep and rough sections, which fall well short of actual scrambling. The Munros to the east of the A82 up Glen Falloch to Crianlarich are all grassy hills which become much steeper and rockier higher up. All of them should be treated with respect in rough weather. I had already been up An Caisteal from the Glen Falloch side so I decided to tackle the others from the Balquhidder side.

I started my walk from the end of the public road near Inverlochlarig (Grid ref. NN439182). It was a near lunchtime start, as I had driven up overnight from my home in the West Country. It was bright to start with, but soon clouded over with the distinct smell of rain later on. The first part of the walk is an easy trek up a farm track by the River Larig. After about 4 km you reach the confluence of the Ishag Burn with the Larig. The Ishag Burn is the source of the River Forth, and changes its' name several times as it wends downstream.

Continue and head on to the easy grassy south east slopes of Beinn a' Chroin. There are a few crags which can be scrambled up or easily avoided depending on your energy and preference. Beinn a'Chroin has triple summits with the central summit about 400 m on from the east summit is the Munro summit. The best side of the mountain is probably the corrie on the south side where the Allt a'Chroin rises from the Lochan a'Chroin, but by this time visibility was down to a stone's throw so I wasn't thinking about the view. After the west summit the mountain slopes down steeply to the col that separates it from An Caisteal. Going up An Caisteal from the col would add at least 45 mins and 200m ascent to the walk, I was tempted but my late start meant that it was already early afternoon and I wanted to 'bag' Beinn Chabhair as well.

So I went down from the col, and skirted the south flank of An Caisteal to reach the bealach below Beinn Chabhair. There are corries on both sides of the bealach. Oddly both are called Coire a' Chuilinn. Beinn Chabhair is a good 300m ascent from the bealach. Rather steep, but there is a path in places, although this time it was often obscured by snow. By the time I reached the top the weather had considerably worsened. Due to poor visibility I decided not to get off the mountain the way I had come up, in case I strayed onto steep crags not visible in the mist. I went down the much easier and well-worn path leading to Meall nan Tarmachan and ultimately down to Glen Falloch.

From the col between Beinn Chabhair and Meall nan Tarmachan it was clear that it was all safe grassy slopes down to the northern Coire a' Chuilinn, and a long walk back to Inverlochlarig. I ate some dried fruit, the last of my food, thinking that if I had really intended an eight hour walk on the first day I would have put a little bit more in my rucksack. But I was comforted by the knowledge that once I reached the bealach between the Coires a'Chuilin it was mostly downhill. By now it was raining quite hard and by the time I reached my car a good two and a half hours later I was soaked beyond any possibility of getting my clothes dry for the following day.

Back at my car, I tipped the water out of my boots and anxiously unwrapped my camera, a replacement for one ruined by a downpour in Knoydart on a previous trip. This time the case was damp but it responded instantly to a press of the button. Perhaps I should have bought the elderly OM1 offered to me the last month, a device from the pre-electronic age and, lacking motors and batteries, actually lighter than most modern cameras. The rest of the evening was spent steaming dry in time-honoured fashion in the pub at Lochearnhead.

Walking Loch Lomond and the Trossachs

A guide to walking and scrambling routes in the beautiful Loch Lomond and the Trossachs National Park. Over 70 graded low-level, mid-level and mountain walks taking in hills, glens and picturesque woodland, as well as all of the region's Munro summits. Highlights include Ben Lui, Ben Lomond, the Cobbler and the Arrochar Alps.
More information

Loch Lomond and the Trossachs National Park covers some 720 sq miles (1,865 sq km) of some of the finest scenery in Scotland. Inaugurated in 2002, this National Park lies within an hour's drive of 70% of Scotland's population. From rolling lowland landscapes in the south to high mountains in the north, there are many lochs and rivers with forests and woodlands adding variety to the landscape. Today it is a working landscape and there is much of interest charting past mans' activities. More Information