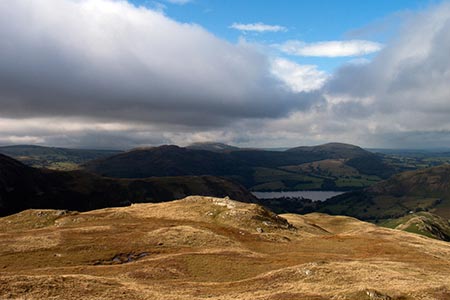 This full day Lake District walk from Patterdale provides a circuit of Boredale offering cracking views of a beautiful part of the Lakeland Fells. The outward leg takes in Place Fell and a section along the shoreline of Ullswater before we return on quiet paths along a wonderful ridge over Beda Fell.

There are a number of options to shorten this route. Some of these are described at the end of the route description. This is a route with cracking views and so a good clear day should be chosen if possible. I've never been fortunate enough to do this walk on such a day, so I am dependent upon Lou for any photos to go with this walk, though I have had glimpses of the views in calmer spells. I can tell you from personal experience that when the cloud descends on Place Fell, navigating around the bogs and finding the path again on the far side can be a real test. Also, having just done this route on a wet and very windy day (winds of 30 mph, gusting to 55 mph), there is virtually no shelter from the elements on either Place Fell or Beda Fell. If caught in such conditions, the sensible thing to do would be to return to Patterdale via the Ullswater shore path.

The start is Patterdale village (Grid ref. NY395159). Whether starting from the Youth Hostel or the Patterdale Hotel car park, head along the A592 to where a minor road leads off NE on a bridge across Goldrill Beck (grid ref. NY397158). Follow the road across the beck. After about 300m ignore the footpath to the right to Howtown and follow the road round to the left for a further 90m. Do not pass through the gate ahead but take the path through the gate on the right signposted to Boredale Hause and Angle Tarn (sign is marked on stone in the wall). When the path splits at grid ref. NY402160, it doesn't really matter which of the two options you take as they both meet up again further up the hill side. For what it is worth, I find it easier to ascend by means of the upper path and descend via the lower path.

During the ascent to Boredale Hause, as well as admiring the views ahead across Brothers Water towards Kirkstone Pass, Red Screes etc., it is worth occasionally looking behind you to the ever improving views across Patterdale and Glenridding to the Helvellyn range. Between Red Screes and Helvellyn, the "Fairfield Horseshoe" ridge can be seen and also the impressive and mighty bulk of St Sunday Crag. On arriving at Boredale Hause, bear round to the left to take the reasonably obvious path heading more or less due North. The going can be a bit soft in places as you start to climb, gently at first, up the Southern slopes of Place Fell. The gradient steepens and the conditions underfoot become rockier as you approach Redgate Head. The path then veers left (West) to climb up Steel Edge. Along this section of the climb there are outstanding views South across Brothers Water with Gray Crag, Hartsop Dodd, Red Screes et al in view. The views West to Fairfield and Helvellyn ranges aren't bad either !

At this point you will see the path heading direct for a summit top cairn. Alas this is the cairn atop Round How. The OS Map shows the path by-passing this top but the path on the ground goes to the top of Round How before leading on further towards the real summit of Place Fell. From the summit head NE, aiming for the crags of High Dodd. Again, this section of the path has a tendency to be squelchy. On arriving at the remains of a stone sheepfold, aim off on a (grid) bearing of 033, detouring around a small bog, to pick up a path that descends West of High Dodd (see variation 2 below for a shorter route).

The descent here is easy going on a fairly steady gradient. Shortly you will arrive at what remains of a disused slate quarry. About 130m beyond the quarry, the path splits. In reality, it doesn't much matter which path you take. However, the left hand path is by far the more interesting. It tracks close to Scalehow Beck as it cascades over a series of rapids and a number of impressive waterfalls, culminating in Scalehow Force, as the beck makes it's way to Ullswater. As the path descends further, impressive views of Ullswater open up.

On arriving at the Ullswater shore path, variations 3 and 4 below may be considered. For the main route, bear Right (NE) and follow the shore path to Sandwick. At the road, turn left to the bridge across Sandwick Beck then join the path around the shore of Ullswater again. This passes Sandwick Bay, goes through Hallinhag Wood via Geordie's Crag and on to Howtown Wyke. Just before the Howtown Pier for the Ullswater Steamers, turn right on a path towards Howtown village. When confronted with the imposing bulk of Steel End, bear round to the right on a path that skirts Steel End. At a path junction above Martindale Church, fork left to emerge, after a further 500m, on to a minor road near Howegrain Beck.

Continue ahead on the road, crossing Howegrain Beck by means of Christy Bridge, and following the road until just after the homestead of Knicklethorns on the left. Immediately after the next wall on the right, take the grassy path (through bracken in summer) to start climbing across the slope of the hill towards the top of the wall ahead. On reaching the wall, the path cuts back right, climbing quite steeply up the hill to a small saddle at Nickles where it meets the main Beda Fell path. Turn left (South) along the Beda Fell path and climb through Low Brock Crags. Just after the cairn at the top of these crags, there is a section of bog to navigate. There are some stepping stones in place but you need much longer legs than mine for them to be of any use. After another short incline you arrive at Beda Head - the rather featureless high point of Beda Fell.

Continue SW along the ridge to descend from the summit. On your left, the hill falls away quite steeply in to Bannerdale, with Rampsgill Beck beyond. On the right is an equally steep fall away in to Boredale with Place Fell on the far side of the infant Boredale Beck. The ridge undulates gently, with occasional rocky outcrops, until just after Bedafell Knott a bridle path cuts across. The path ahead is the more obvious path but our route turns right (West) at this point to start a gentle descent via the wonderfully named Freeze Beck to Boredale Hause. On arriving back at Boredale Hause, it is simply a matter of retracing the earlier outward route back to Patterdale and either the Youth Hostel or the Hotel Car Park, depending on where you started from. As mentioned in the description of the outward route, I personally find the lower of the two paths the easier descent back towards Patterdale but both paths end up at the same point.

1. Starting the route from Howtown will save approximately 1.5km distance and 230m of ascent. However, the down side of this is that the hardest ascent will then come in the return leg of the walk (something I prefer to avoid). Howtown is also more difficult to reach by road and parking is much more problematic than in Patterdale.

2. On the descent from Place Fell, instead of forking left at the sheepfold on Low Moss, bearing right will follow the main path down from Place Fell and leads to a bridge across Boredale Beck at Garth Heads. Soon after crossing the beck, cross the Boredale road and take the path straight ahead that loops round to pass between the two sections of Winter Crag, leading to the road near Knicklethorns where the main route is rejoined. This saves about 5.2km but omits the scenic treats of the Ullswater shoreline.

3. After descending from Place Fell to the Ullswater path, turn left along the Ullswater path to return to Patterdale via the shore line. This will give a route of 12.2km with 860m of ascent - a good half day walk.

4. After descending from Place Fell to the Ullswater path, and following the path to Howtown, take the Ullswater Steamer to Glenridding and then a short lake side walk back to Patterdale. This is a great option for 'rewarding' children for their efforts in hauling themselves up and over Place Fell.