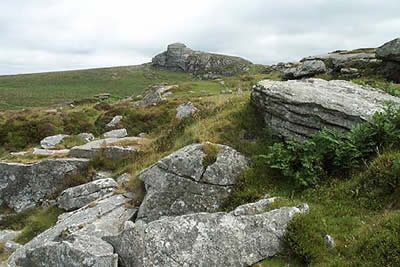 Caption - Haytor Rocks consists of two large granite outcrops. This view, looking east depicts the higher of the two the summit of which can be reached used steps and grab irons.

Dartmoor National Park is wholly contained within the boundaries of Devon and is dominated by some of the wildest upland moorland in the UK. Granite outcrops or tors are a feature of the landscape and add visual interest. Beautiful rolling countryside surrounds the high moors adding to the scenic contrasts enjoyed by visitors. With a long and varied history there is much evidence of former ages from Neolithic sites to more recent industrial heritage. More Information