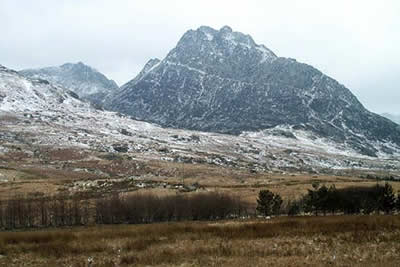 Caption - Tryfan in winter is a challenge requiring skill and the correct equipment. Despite the lack of snow on this occasion there was plenty of ice, which caused problems near the summit. This picture shows clearly the main paths on the north ridge with the 'Heather Terrace' particularly obvious on the south face. Behind can be seen Bristly Ridge, which links Tryfan to Glyder Fawr.

Walk 3001 : Tryfan by the North Ridge from Ogwen Valley