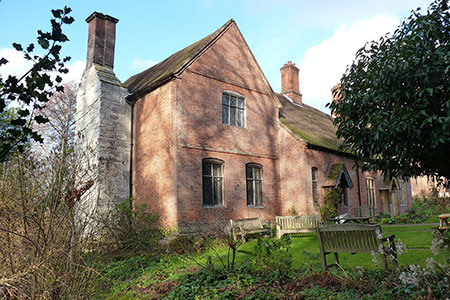 Caption - The Templars' Hall - 13th or 14th century, and although now encased in brick, it's actually a 3-bayed timber-framed aisled hall, with this 15th century wing and 16th century chimney stack on the gable. The whole was Grade II* listed LinkExternal link in 1952, and clearly dates back to the times of the Knights Templar in the area.

The county of Warwickshire is in the English Midlands. The north and centre of the county are the areas with the highest population density. The north offers undulating countryside in contrast to the largely rural and sparsely populated south, which contains a small section of the Cotswolds. The highest point in the county, at 261 m (856 ft), is Ebrington Hill, on the border with Gloucestershire. The featured walks include sections of the Millennium Way and Heart of England Way.