The Cambrian Mountains are a wild and empty plateau lying between the Snowdonia and Brecon Beacons National Parks. They are Wales' fourth national park in-waiting; designated in 1972, the Park was later cheated of recognition and protection, by an unholy alliance of landowners and politicians. 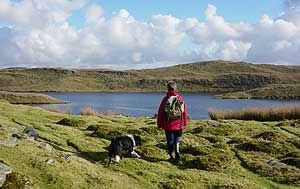 Once known as the "Green Desert of Wales", this huge area contains no sizeable settlements, except round its edges. It is generally between 1500' and 2500' in altitude, and through its length passes the Cambrian Way long-distance trail, roughly following the main Welsh watershed. Here are born many great rivers, whose valleys divide the plateau, and give the mountains much of their charm, as well as shelter for isolated farmsteads, and routes for travellers.

The Cambrian Mountains are divided by the A44 - the only main road which crosses them. To the north is Plynlimon (Pumlumon in Welsh, but pronounced "Pimlimon"), which includes the highest point in the range. Plynlimon is a massif, rather than a single hill-top; the rivers Severn and Wye start on its slopes, as do their respective trails; Glyndwr's Way national trail brushes its northern edge. From its high ground there are views of the whole of upland Wales, and hidden within its folds are lakes and true mountain scenery, waterfalls, deserted valleys, and high, airy escarpments.

South of the A44 lies Elenydd (pronounced "Elennith"), a vast area of rolling moorland with few distinctive hill tops. Its best-known feature is the Elan valley, whose reservoirs supply Birmingham's water, but it is also where the rivers Irfon, Teifi and Tywi have their sources. With only a few motor roads, this is terrain where the walker is king - or queen - of a seemingly boundless landscape of grassy hills and sparkling rivers. Drygarn Fawr is the highest point, and though only just over 2100', it is no easy summit. Other gems of the Elenydd include Teifi Pools, the Doethie and Pysgotwr valleys, and Mynydd Mallaen.