Exmoor National Park lies in West Somerset and North Devon including a dramatic section of coast. Wild moorland dominates the high ground with Dunkery Beacon the highest point within the National Park. Wooded valleys or combes cut deep into this upland and provide another typical feature of the landscape. The coast includes some of the highest cliffs in the UK with easy access provided by the South West Coast National Trail. 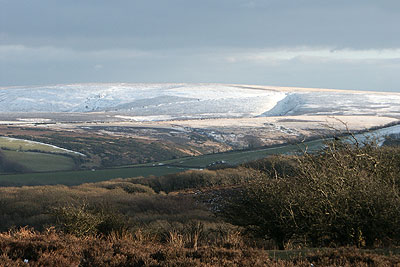 Although it is one of the smaller National Parks at 267 square miles (693 sq.km), it contains some wonderful landscapes and plays an important part of our national heritage. Like all National Parks, Exmoor is home to a working population with more than ten thousand people over residing within the boundaries. It is this unique partnership that ensures the continued success of the National Park so that it remains a place to live, visit, work and enjoy. The nearest large centres of population are Exeter some thirty miles south and Taunton about twelve miles from the eastern boundary and the park provides a source of outdoor leisure activities for their residents.

Despite its relatively small size, the park contains a wide variety of magnificent landscapes. The central plateau of open moorland is remote and spacious. To the north the moors terminate in towering cliffs above the Bristol Channel. Here rocky headlands, wooded ravines, waterfalls and heaps of fallen rock make this an area of outstanding scenic beauty justly confirming its status as a Heritage Coast.

The inland grass moors are surrounded by heather-clad rolling hills which rise to over 900 ft (300 m). The highest point in the park is Dunkery Beacon at 1704 ft (519 m) and this is a popular destination for walkers. Like all high land close to the sea rainfall can be high with an average of 80 inches per annum (2000mm) and Exmoor acts as a catchment area for numerous rivers and streams which flow rapidly to the north and more gently to the south. The main river, is the River Exe after which the area is named. Steep wooded valleys formed by erosion of fast flowing streams dissect the moorland. Known as combes they add a unique character to the area.

The Brendon Hills lie to the east. Although heavily wooded in the north their character changes as you head south with enclosed fields surrounded hedges replacing the woodland. This landscape extends across the south western lower slopes of the moor with cattle and sheep farming providing the livelihood.

The history of Exmoor is recorded in its landscape, which provides a record of how people lived there in the past. From a historical perspective it is of particular importance as there are many undisturbed archaeological sites and monuments with probably more still to be discovered.

Whether you are an experienced walker or someone who prefers a short stroll, Exmoor National Park is an ideal place to explore. Over six hundred miles (1000 km) of Rights of Way, footpaths and bridleways criss cross the landscape. Woodlands, tumbling rivers and open heather covered moorland combine to provide an ever changing view. The South West Coast Path runs along Exmoor's coastline with some challenging sections of route. The Two Moors Way, another national Trail, is also a popular way to experience the best of Exmoor.