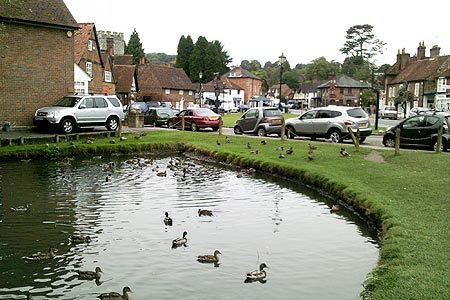 Four stops in a row on the north-west extremity of London Underground's Metropolitan Line, along with a network of public footpaths offer numerous possibilities for walk route variations in rural Buckinghamshire and Hertfordshire. This is one route idea, starting at Chalfont and Latimer station in Buckinghamshire and finishing at Chorleywood, part of the Three Rivers district of Hertfordshire. The route follows part of two long distance walking routes, the South Bucks Way and the Chiltern Way and to make route-finding easier, a copy of the relevant ordnance survey map and a compass are recommended. The walk follows a linear route between Chalfont and Latimer and passes through the town of Chalfont St Giles, but, to make the walk longer and, to include part of the Chess Valley, I have added an additional loop. Further, another additional minor loop includes the old church at Sarratt where, if it is open, a look around inside feels a bit like stepping back in time a hundred years or more. This addition to the route also provides the one point in the whole walk where any real height is gained, with some corresponding views.

From Chalfont and Latimer station follow the main road due west (A404) to locate, on the left, the narrow country lane of Finch Lane which turns into a public footpath ahead as the route goes downhill. Turn right at the busy main road, London Road East, and after about a quarter of a mile, take a signed public footpath on the other side of the road which leads to a footbridge across the River Misbourne which at this point appears as little wider than a stream to join up with the South Bucks Way. The route now follows roughly due south with the sound of traffic apparent from London Road East to the left, across fields and through woods, crossing a narrow lane at one point before Chalfont Mill is reached with a ford across the road on the left. A little further on brings you to the main road of Chalfont St Giles with its village green and duck pond. The route ahead may not be immediately obvious but, on crossing the main road, on the left of the Post Office is an opening between buildings with a timber frame roof and signs for the Chiltern Way appear directly ahead, to the right of the parish church.

Now follow the Chiltern Way as it crosses the busy A413. A narrow path leads off to the left of the driveway ahead. The route continues with a mixture of woods and fields. One possible moment of indecision is where the route meets Newland Manor, just across a road, but signposts indicate the way to follow over a stile off to the left of the main driveway. The path passes Shrubs Wood on the left before entering Newland Gorse. A painted sign on a tree indicates that the Chiltern Way continues to the right.

At Philipshill Wood take a left turning along a path that goes initially up through a canopy of trees, Shire Lane on the map, before emerging into the open as the houses of Chorleywood start to come into view. On reaching Shire Lane, an option to shorten the walk is to head straight for Chorleywood station from here. This route now bears left down Chalfont Lane and goes straight ahead at the next crossroads to continue down Farm Road. Just before Newhouse Farm, a signed public footpath on the right indicates the way to go through Carpenter's Wood which, as a notice board later explains, is an ancient semi-natural woodland that has been there for at least the last 400 years. It is located within the Metropolitan Green Belt and Chilterns AONB.

After the path passes under the railway line, it continues to the busy Amersham Road. Cross here and take the next public footpath sign on the right; the way ahead is private, in any case. After passing the cricket field, cross another road and continue left along the next path past, and then through, Turveylane Wood which is initially on the right of a field. Once the path emerges into the open, the Chess Valley at Sarratt appears ahead, reached by way of a footbridge that has a railing on one side only but in any case, the water appears to be only about one or two feet deep below. Now it's make your mind up time about how to conclude the walk. There are public footpaths leading to all four tube stations - Chesham, Chalfont& Latimer, Chorleywood and Rickmansworth. This route choice leads back to Chorleywood, but first take the path uphill signposted for Sarratt Church in .25 of a mile. The walk up the grassy hill beyond a stile reveals a view overlooking the Chess Valley to the left before the path bears right alongside a hedge and the church appears ahead at the next gate.

From the church, by way of variety, a different public footpath leads back down to the Chess Valley route and with a view out across fields and woodland but with the traffic noise from the busy M25, traffic noise being audible even from the top of the hill near the church.

Once back on the Chess Valley route, cross North Road and later a footbridge over the river. The next signed public footpath turning up through woods on the right leads to Chorleywood Common and the railway station.