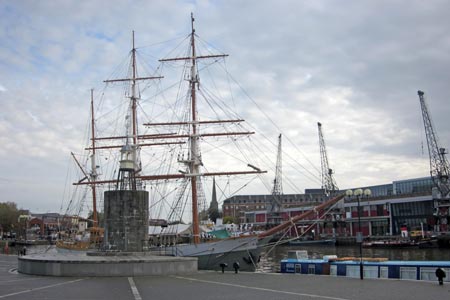 The presence of the River Avon and the Avon Gorge has ensured that the expansion of the city of Bristol to the south west has been restricted to a relatively small area. This short walk takes advantage of the consequent proximity of open country to the centre, taking in the redevelopment of the docks and a couple of Brunel's most significant works along the way.

The route begins in the heart of the city outside the Information Centre on Broad Quay (Grid ref. ST585725) and continues south along the waterfront to the amphitheatre at Waterfront Square. At this point, look left over the waterfront panorama towards the soaring spire of St.Mary Redcliffe which dates back to the 12thC and was described by Elizabeth I as "the fairest, goodliest, and most famous parish church in England", a sentiment shared by many of today's Bristolians. Continue on the waymarked route along the north side of the harbour and as you reach the busy Hotwells Road, the first of Brunel's great masterpieces the SS Great Britain can be seen in its dry dock across the river.

The path swings away from the road, passing several new housing developments to arrive at the former pumping station for the locks and now a pub appropriately named The Pump House. The elegant Georgian terraces of our eventual destination at Clifton can be on the hill to the right. Turn left on to Merchants Rd and continue straight on over the bridge for 250m to its junction with Cumberland Road. Cross the road and turn right along the north bank of the Avon past the workshops of the heritage Bristol Harbour Railway and a couple of former bonded warehouses, a reminder of the days when this area was a busy working port.

Turn left after 300m on to a former railway bridge over the Avon which is now restricted to pedestrian and cycle use. At the far end, turn right at a waymarker on to the Avon Walkway as we leave the city behind to walk towards our second Brunel masterpiece, the Clifton Suspension Bridge. The terrain begins to rise steeply away on both sides of the river as the route enters the wooded Avon Gorge. The contrast between the traffic thundering along the Portway on the opposite bank of the river and our route along a quiet bridleway, punctuated only by the occasional walker or cyclist is striking. The remains of the lower terminus of the long gone Clifton Rocks Railway can be seen on the Portway, with the Georgian buildings of Clifton looking down from above as the bridge dominates the view ahead.

From down here 75m below the deck, one can appreciate the challenges facing Brunel and his colleagues during the construction of this remarkable bridge in the early years of Victoria's reign so leave some time to enjoy the view, something which Brunel sadly did not survive to see having died five years before its opening in 1864. Continuing along the riverside path under the bridge, turn left after 200m at a "Monarchs Way" waymarker. Go under a railway bridge and continue up the occasionally rocky and muddy path as it climbs steeply through Leigh Woods to reach North Road. Turn left following the road for about a kilometre, turning left again when it joins Bridge Road and cross the Suspension Bridge from where you can look down on much of the route that we have followed. From here, it's a short walk to the cafes and bars in the centre of Clifton to enjoy some well earned refreshment.

As the walk begins in the city centre, the start is very accessible by public transport from a wide area. Similarly there is a very frequent bus service from the finish at Clifton back to the start. Information can be found on the Traveline South West website.