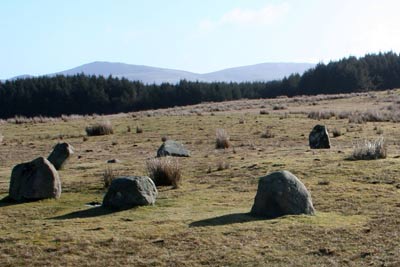 This Lake District walk takes in a group of the less frequented "Wainwright's" in the Western fells of Lakeland. Being more difficult to access and away from the beaten tourist paths, there is a strong possibility of not meeting anybody else all day. However, on a clear day, you will enjoy some of the best views in the Lake District.

The full route (21.5km with 1,077m of ascent) is a full day out with the toughest climb coming near the end of the day. There is an option, described in the text, to significantly shorten the route (10.3km and 402m of ascent) to make an enjoyable half day out. The walk starts near Kinniside Stone Circle (not exactly a Stonehenge!) on the minor road from Ennerdale Bridge to Calder Bridge. There is no car park as such at the start of the route, but a gravel area where a bridleway joins the road at grid ref. NY059137 allows off road parking for about 5 cars.

The Route - Start by walking along the road to pick up the waymarked bridleway at 061-136 for a long steady climb along the flanks of the hill, passing by a working forest. Just before arriving at a gate near where the bridleway and forest track meet, kink right then left to stay on the bridleway, still climbing very gently. The bridleway is then bounded on the right by a pine forest with a wall on the left separating the route from the open moors. Approximately 650m after the right / left kink, there is a metal gate on the left. The gate is often open, allowing access on to the moor (open access land), in which case the shortest route is to go through the gate and follow a track visible on the ground (though not on OS maps) to the summit of Grike. However, on my last visit to the area (April 06), the gate was locked - maybe due to lambing ? - in which case continue along the bridleway, passing through an area of pine forest on both sides (though OS don't appear to be aware of the forest on the North [left] !), until the plantation on the left finishes.

At this point make your way up hill across the heathery moor to the fence, where there are a number of improvised stiles, cross the fence and on to the cairn at the summit of Grike. Although a bit of a nothing hill on approach, arriving at the summit of Grike reveals extensive views over Cleator Moor towards Whitehaven and the Irish Sea. From Grike head in an Easterly direction along the path visible on the ground, passing to the left of the radio mast and continue on to the summit of Crag Fell. The section from Grike to Crag Fell can be extremely wet underfoot. Again, on the approach, Crag Fell gives the distinct impression of being a "nothing hill" - apart from another tick in the box on the list of Wainwright's. However, on reaching the summit, and especially after dropping down slightly East of the summit, the views of Ennerdale are stunning, Ennerdale being hemmed in by the Red Pike - High Stile ridge on the left and Pillar / Steeple on the right. On a good day there aren't too many better views for a coffee stop.

From the summit of Crag Fell, follow the clear grassy path to descend SE back to the pine forest and the bridleway left earlier. For the shorter route, turn right and follow the bridleway back to the road and car. For the full route, enter the woodland on the bridleway and at grid ref. NY100137 descend on the forest track to the stagnant stream at the bottom of the 'valley'. The descent is very boggy and quite slippery - being brought up walking the bogs of Bleaklow, Kinder Scout, Black Hill etc. and developing skills / techniques of crossing bog lands was a very definite bonus here ! After crossing the stream, turn left to climb out of the forest (still very wet and muddy) on the obvious path to a stile over a fence near a wall junction (Grid ref. NY101135). After crossing the stile, set out on the long uphill drag to the top of Iron Crag, keeping the dry stone wall on the left. Although such things can happen in any part of the countryside, those of a squeamish nature (or those with children who are easily upset) may like to be warned that the last time we walked this section we saw the rotting remains of 8 sheep that had clearly been killed and half eaten by some form of predator.

From the top of Iron Crag, descend to the 'valley' bottom then climb more steeply, still along side the wall, on the flanks of Caw Fell. When the wall bends to the left at the top of the broad ridge, turn left and follow the wall in a generally E direction. There are excellent views to the right of the Scafell Massif and Seatallan - which looks a far more impressive hill from this angle than it does approaching from Wasdale. The summit cairn of Caw Fell can be reached by crossing the wall at a number of points. From Caw Fell the objective is to descend to the old intake works at the confluence of Bleaberry Gill, Long Grain and Hole Gill at grid reference NY101112. This can be achieved by walking along the top of the ridge from Caw Fell then dropping quite steeply down the shoulder to the river.

For those who prefer to avoid steep descents, retrace the route to Caw Fell back alongside the wall as far as the valley between Caw Fell and Iron Crag then turn left to pick your own way across the open moorland and down to the intake works (personal experience is that it is easier walking on the North side of Bleaberry Gill than the South side and also it is easier to ford the streams from this route rather than the shoulder of Caw Fell option). After fording the streams, tackle the steep climb of Lank Rigg on either bank of Hole Gill. At the top of Hole Gill, the gradient eases and the summit trig point comes in to view. Looking N from the summit, the top of Whoap can be seen and, at the col between Whoap and Lank Rigg, a path leading off to the left is clearly visible. Descend to the col and then turn left on this path. At times the path is indistinct but gradually becomes clearer as it makes it's way back to the road (though at 5.2km, this is a longer 'walk out' than I prefer). At the road, turn right to return back to the car.

NOTE : Although it is possible to omit the summit of Lank Rigg - the most disappointing of the 4 peaks on the route - by climbing Red Gill towards the col between Whoap and Lank Rigg, the height gain is not much more in topping Lank Rigg and the descent path required is far more obvious - and easier to find - from the summit of Lank Rigg than it is by heading straight to the col.

Part of the Walking the Lake District Fells series, this guidebook covers a wide range of routes to 25 Lakeland summits that can be climbed from the Wasdale, Eskdale and Ennerdale valleys, with highlights including Scafell Pike, Great Gable and Pillar. Suggestions for longer ridge routes are also included.
More information