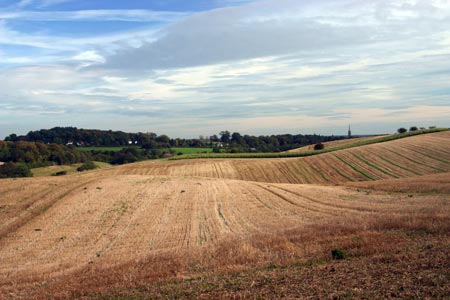 The terrain of this walk varies considerably and includes parkland, meadows, the secluded Welton Vale and windswept heights of Jack's Furze reached by a permissive footpath that gives the best views of the entire walk.

South Elkington woods, and those in Welton Vale, were laid out in the mid C19th, at a time when 'botanising' was popular amongst the country gentry who avidly snapped up seeds of new species brought back by plant hunters from around the world. Welton Vale is particularly notable in this respect with its Coastal Redwoods (Sequoia Sempervirens). Native to California and Oregon these were discovered in 1841 and introduced into Britain in 1853. There is a seat by the two whalebones guarding the entrance to Welton Vale with a rather droll dedication to a poacher turned gamekeeper. It makes a convenient refreshment stop too before continuing the walk through perhaps the pleasantest woodland stroll in the area.

Hallington was always a small place and its name derives from the Old English for "Halla's farmstead". Even in the Domesday Book it was lumped together with Raithby, Maltby and Kelstern and only 41 freeman and 20 villagers are recorded for all four villages combined. Some 700 years later however Hallington however lay close to the Louth to Bardney branch line, which opened in December 1876, and had it's own station. Something of a latecomer as railways go, its construction was delayed on account of the cost of tunnelling through the Wolds. It closed early too! Passenger services ended in 1951 and goods trains were progressively withdrawn until the line finally closed in 1960.

We approach today's hamlet of Raithby across its former mediaeval village site where ancient streets and house platforms remain clearly discernable. St Peters church with the ornate, Gothic styling that was fashionable at the time, was built in 1839 at the personal cost of the Reverend Henry Chaplin. It is constructed of brick, cemented over to imitate masonry although inside a late C13th north arcade survives and the windows still contain medallions of old German / Flemish glass. Another curiosity is a barrel organ (also of 1839), which is the only one in Lincolnshire still in working order.

Note If the small carpark recommended for the start is full, walkers will find roadside spaces near the adjacent by-pass bridge.

Enter Hubbard's Hills and either walk through the valley floor by the River Lud or climb the steps and use the upper path. Continue through to Westgate Fields. Cross Westgate Fields, turning left along the road at the far end (Westgate) to soon pass the junction with St Mary's Lane. Then turn right up a signed lane and from a stile by a barn at the end keep ahead over a meadow to Louth by-pass.

Cross carefully and keep ahead over a farm lane and over two meadows enter Cow Pasture Wood; at the far the side walk down to the road. Cross to a stile opposite and proceed down another meadow, veering right slightly to reach a footbridge a stile at either end. Climb these and turn right, soon joining a track. Keep forward on this (there's a short concrete section) continuing on grass and keeping by a fence until you reach a bridle gate. Go through this and follow the path (ignoring all side paths) through Elkington and you will come to a 3-way footpath sign at two whalebones.

Now turn left to descend Welton Vale. Just before reaching the main road watch for a narrow footpath branching to the right. Cross the A157 to join a permissive path along a meadow edge to a stile, footbridge and steps. In the next field walk (quite steeply) uphill from the nearby corner, soon cutting through a hedge gap to complete the climb to Jack's Furze where a track begins. Have a breather here as you take in the fabulous views; then continue ahead to another road. NOTE It seems the permissive path above has been closed recently. Has anyone any ideas for completing the route without using this path? At the moment the route can't be completed satisfactorily.

Bear left and take the first right turning into Hallington. Just after the entrance to Home Farm, another permissive path begins on the left cutting through an orchard. From the far corner walk by a fence until you can head diagonally over a large paddock to its far left hand corner. A stile here exits onto the old railway close to the former station. Take your bearing from the footpath signpost and walk across the arable field ahead and, when it can be seen, aim just left of Raithby church tower. From the stile in the next hedge continue over Raithby's lost village site and pass round a large house to meet a road directly opposite Raithby church.

From the church re-cross the road into the field but now veer right to pass a small brick building and locate a footbridge on your right; from it walk up through a bridlegate to the left of a house. Now turn left along a grass headland path. At a 3-way footpath sign go left again over a causeway between two lakes, then from a footbridge re-cross the old railway before veering right over an arable field to another footbridge. Now bear left past a house and walk up its drive to a road.

Finally turn right to return to Hubbard's Hills. (Alternatively there is a right of way in the meadow opposite; it keeps parallel to the road, which can be rejoined by steps at the far end.)