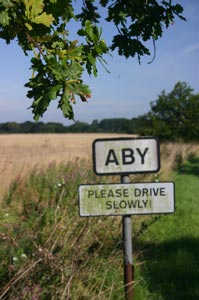 Aby always carries the twin honours of being the first in any alphabetical list of Lincolnshire place-names - and the shortest too! The name derives from Old English and Danish and means "the farmstead by the stream" and was recorded as "Abi" in the Domesday Book when Odo, half brother of William the Conqueror and Bishop of Bayeux was granted the manor. The mediaeval church here (All Saints) collapsed in 1642 and the parish was then combined with nearby Belleau and shared its church. Nevertheless Belleau's churchyard stayed in use and in 1888 a tin mortuary chapel was built; this cost of £ 95 and stood until about five years ago. At the other end of the village is an imposing Methodist chapel of 1895.

At Belleau St John the Baptist church stands on the hilltop above the village. The outside was rebuilt in 1862, but its interior still has much of its mediaeval atmosphere. One of the memorials is to Sir Henry Vane (died 1662) who was obviously a somewhat larger then life character. He was an important republican during the Civil War and later became governor of Massachusetts. Following this life in the limelight of English and American politics he retired to the privacy of Belleau but upon Charles II's Restoration was executed for treason. Also look out for the large gravestone to Oriana Michell (died 1780) that forms the step into the porch and the now quite rare "VR" letterbox set into the wall on the hillside below.

Belleau surrounds a deep hollow where springs bubble out of the hillside to form the Great Eau - a virtually instantaneous river! It has been a farming community since at least early mediaeval times and there was once a moated manor house here that was once the home of the Willoughby family. In due course they married into the Willoughby D'Eresby title and departed to Eresby Hall near Spilsby where the church contains a number of outstanding family monuments. Further marriages raised their social status yet again and took them to Grimsthorpe Castle near Bourne. Nevertheless a curious legacy of the Willoughby estate still exists. In the farmyard there is a particularly fine Tudor brick dovecote and nearby, within what was the former moat, a barn that retains both Tudor brickwork and windows. Close by a modern barn (1904) incorporates a mediaeval archway bearing the Willoughby family mascot, a bearded "Wild Man" - probably a fertility symbol. (NB. These features can only be seen by leaving the farmyard track just beyond the modern barn and peering around the back. Do not trespass elsewhere into the farmyard!)

The name of the Railway Tavern at Aby recalls the time when Aby had its own station on the former East Lincolnshire Railway main line between Grimsby and Peterborough that passed just east of the village. The line closed in 1970 and has mostly now disappeared or been tamed by nature.

Notes Readers may park at the Railway Tavern.

Leave the inn carpark and turn right into Aby and there turn right again along School Lane. Turn left into New Street to arrive opposite the Methodist chapel. Turn right and in a few paces look across the road for a sign where a footpath begins.

Walk over a long meadow towards a footbridge seen by some trees at the far end. Cross this and follow the path to a second, long footbridge and cross that too. The path now goes to the right of a hedge end and heads up a slope to a stile. (This may be overgrown! If that is the case try to the left of the hedge instead to its corner; the stile will then be on your right.) Either way turn left here and walk down the field aiming just to the right of a group of trees until the ground drops quite steeply to a stream. Bear right alongside this and on reaching a footbridge turn left across it. Now aim towards Belleau church (visible ahead) and soon join a lane. Turn left into Belleau and walk uphill to the church.

To return to Aby go back downhill and bear right along the unsigned track past the Tudor dovecote, the Belleau Springs and the farmyard barns. Beyond these is a footpath sign and kissing gate on your left. From them walk close beside the Great Eau until you reach a footbridge; now cross over and continue by a hedge to a second bridge. Cross that too and turn sharp right behind a hedge, going left on reaching the field corner until a hedge gap gives access into Aby churchyard. Walk through to a gate at the far side then follow a clear grass track straight back to the Railway Tavern.