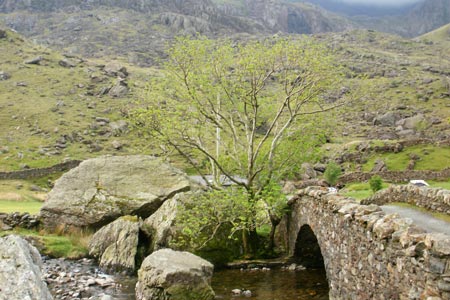 The idea of walking part way up Snowdon, but not to the top, is not a familiar concept for most walkers who head for the Snowdon range, unless forced back down by adverse weather conditions. But here is an unusual walk since a) no summits are included, b) you are likely to encounter few, if any, other walkers and c) the terrain and gradient are sufficiently rugged and steep to leave you feeling afterwards as though you have walked up at least one mountain. The amount of leg work, altitude gain, sweat and toil involved would probably mean attaining at least one summit in other circumstances. So why go to all this hassle if you are not going to reach the top of anything? For one thing, it is a chance to see part of the Snowdon range that is not normally seen as it is off the beaten track. There are also two remote but pretty tarns high up in the mountains, their small size in no way lessening their visual appeal. You have views of some spectacular, wild and rugged mountain scenery including cliffs, buttresses and crags. There is also the discovery of a little trodden route that runs high above the Llanberis Pass.

The route generally includes a lot of walking up very steep, pathless, rocky fellside with a lot of height to be gained in a relatively short distance almost from the outset. Further, the Cwm Beudy Mawr route is a narrow path with steep slopes down to the left. These slopes are sufficiently steep to warrant particular care in following a path which, in a route-finding sense is reliable as long as it lasts though it is narrow throughout and goes up and down.

The start point is the car park near to the bridge called Pont Y Gromlech, heading up past Ynys Ettws and up to the left of Cwm Glas Mawr. As the walk finishes at Pen y Pass, it may be preferable to park at the latter and either walk or, better still, take the bus down to the car park at the start of the walk. A road nearby crosses over another humpback bridge and passes the climbing hut known as Ynys Ettws. The steep, rugged ascent begins here. As there is no path to follow, the best option is to weave a route in and out of rocks in a roughly south westerly direction and keeping the stream in sight to your right as a useful landmark. When the gradient levels off briefly, Dinas Mot is seen as the cliff on the left and you need to veer right to avoid it and follow up diagonally left past it. The steepest stretch of the lot is higher up still where a stream issuing to the right appears and you need to follow the steep fellside to the left of it. Cwm Glas is then to the right and Llyn Glas, with its one island in particular, frequented by birds, offers a fine foreground to the pinnacles and crags of Crib Goch high above. One possible way of extending the walk would be to walk up the very steep scree slope up to Bwlch Coch but this is not advisable if weather conditions are poor, as is often the case with the Snowdon range.

One of the highest and smallest tarns in Snowdonia, Llyn Bach is about 150 feet higher than Llyn Glas to the south west of it. It is overlooked by the dramatic cliffs of Clogwyn y Person where you may see rock climbers and this landmark should appear on the left as you locate it by climbing a steep grassy slope with a stream issuing to the left. This is another pretty little tarn amid wild and rugged rock scenery and high mountains. The clear water of the tarn shows stones on the bottom and some rocky outcrops may be seen reflected in the water if there is no wind.

Now descend back down to Llyn Glas by the same route. In theory, you could retrace your route all the way back down to the car park and the start point, but that would not only mean losing all the height gained with such toil earlier in the walk but also leave a rather unwanted way back to Pen Y Pass by either a narrow road without a pavement or alongside it. Therefore, the preferred choice is to locate the Cwm Beudy Mawr route. There is no one single easy way to locate this path, but by trending in the right direction (slightly north of east) and keeping the steep north ridge of Crib Goch on the right should enable it to be located. It is important to do so if continuing the route this way as the slope is steep and rugged and picking your own route across it would be a tricky business. This path, although little wider than a sheep track, skirts the steep north ridge of Crib Goch as it contours around the felllside with the Llanberis Pass way below. At times it peters out temporarily before reappearing, though, with the Pyg Track in sight, it eventually disappears and apparently would not be at all easy to find if doing the route the other way round from the Pyg Track. However, it is possible to carefully pick ones own route down in and out of rocks and treading carefully down steep grassy and rocky slopes. After the Cwm Beudy Mawr route, the Pyg Track feels like being on terra firma again. Pen y Pass, the final objective is now clearly in view and reached by descending one of the busiest routes up or down Snowdon.

Guidebook describing 30 walks in Snowdonia, Wales. Routes are mostly low level and on clear paths and showcase the region's beautiful scenery and rich history and culture. Part of a 2-volume set, this northern volume includes the Snowdon area, the Ogwen and Conwy Valleys, Betws-y-Coed, Beddgelert, Ffestiniog and the coast.
More information