Warning: mysqli_fetch_array() expects parameter 1 to be mysqli_result, null given in /var/www/vhosts/walkingbritain.co.uk/httpdocs/walk-description.php on line 91
 Gamlingay, Tetworth & Everton from Potton - Bedfordshire Walk 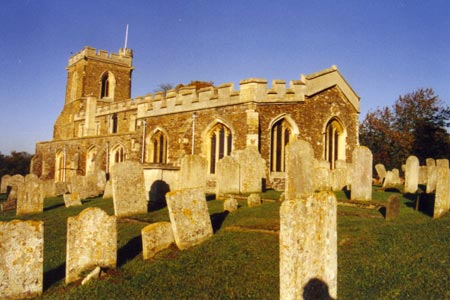 Park in Potton free car park (Grid Ref TL225492) accessed via Royston Street (B1042). On leaving the car park go straight down the road into Market Square. (This was rebuilt in 1783 after being more or less totally destroyed by a fire; a lot of help came from the disaster relief of the period - contributions from parishes up and down the land.) Turn right up the side of the Square and up King Street mostly fronted by 18th Century houses. Look out for Church Causeway on the right and follow it to come out on a road opposite the 13th Century Church which is well worth a visit. (See option A below) Turn right up the road past the length of the church. At the junction continue straight on along Hatley Road. At a footpath sign fork left past the steel bar and follow the field edge, fence and hedge left. At the end of the field turn right, again along the field edge, hedge left. At a track T-junction turn left and, within 25 yards or so, right to enter Potton Woods.

Potton Woods is an SSSI, an ancient woodland with many wild flower species and lots of bird life. You have joined the Clopton Way an 11 mile route which runs from Wimpole (NT) to Gamlingay Cinques. You will follow this for some three miles, commencing by following a broad ride through the woods. At a cross junction with power lines turn left down another broad ride. This eventually becomes narrower and soon the path forks right, through the heart of the woods, to arrive eventually at the edge. This is the Bedfordshire/Cambridgeshire border with views ahead over Gamlingay and the surrounding area of Cambridgeshire. Turn left and follow a field break. Just before a power line turn right down another field break which becomes a distinct track and eventually tarmac just before coming out onto the B1040. Turn right along the road and follow it for some 600 yards. Turn left up West Road. Pass Wootton Field and follow the road signed as the Clopton Way. This becomes a country lane before arriving at Little Heath. Turn right at the T-junction and then left at the next T-junction. Soon turn right up Park Lane, still part of the Clopton Way. (Option A rejoins the main route here.) Follow this pleasant enclosed green lane to a junction. Turn right to soon emerge into a cluster of cottages on a dirt track, part of the old hamlet of Gamlingay Cinques (No French connection but a corruption of "sinks", the marshy areas in the vicinity). Cross the dirt road and continue to the surfaced road where, in a car park for a neighbouring Wildlife Trust area, there is a display about the Greensand Ridge Walk one end of which effectively starts from here- just as the Clopton Way ends.

On the road turn left. Go straight over the cross roads and after about 100 yards turn left onto the start of the Greensands Ridge Walk. This stretch is through parkland, with views to the right over central Bedfordshire. Initially on grass as far as a white cottage and then on a drive, later reverting to grass and back to a drive, it passes Tetworth Hall and Woodbury Hall before arriving at Everton. It is well signed with the GRW logo and is straight all the way except between the two Halls where, at a T-junction, it turns right and then in a 100 yards or so left, changing from a bridle path to a footpath across a field.

At Everton pass the ancient, and interesting (open weekends) church on the left and go straight on to a main road at the Thornton Arms. Here turn left, leaving the Greensands Ridge Walk, and follow the road past a lane coming in on the left to reach Ashmore Farm on the right. Here turn down the byway to Deepdale. At a track junction where paddocks give way to proper farming turn left and follow this broad track all the way to Potton. By the time it passes the remains of a windmill it has turned to rough asphalt. On reaching the outskirts of Potton keep straight on until the Rising Sun pub. Turn right here down Horslow Street. The new houses soon give way to older dwellings. Opposite the Salvation Army turn left down Bull Street, again with older houses, to return to the Market Square and retrace your steps to the car park.

However until recently one part was completely impassable and, although it has recently been cleared, unless it is used there is some probability that it will become so again, whatever official resources are put into maintaining it. Note that I was once advised by a police patrol that one section was best avoided but if you feel moved to do your bit to keep a historic route open and in use, it is as follows:

At the church instead of turning right turn left down to the B1040 where you turn left again. When the B road turns left continue straight on and then fork right towards Everton. Turn right down the bridleway designated Common Road. (See option B below) This leads into a traveller facility. Before this is reached there is a high iron paling fence on the right. You avoid the traveller facility by going through a gap provided in the fence and going straight on through bollards to continue up what was no doubt once a beautiful green lane. Until recently this was the way which was completely blocked by brambles and debris. Thanks to the efforts of the Bedfordshire Rights of Way Office it has now been cleared and is passable, but it has to be said that it is still used in its early stretches for fires and rubbish dumping despite efforts to keep it clear, and vegetation has yet to regenerate in place of the brambles. I understand the Rights of Way staff will be making regular visits to ensure it stays open, and it is not a long stretch before you emerge over a mound into the corner of a large field. Go straight along the field edge, hedge right. (Option B rejoins option A at this point.) This finishes and then a hedge appears on the left. Continue along the field edge to a bridge and gate. Keep along the hedge right and through a gate. Bear left along the field edge, wood left. Go through a kissing gate and over two stiles by gates and along a farm track to emerge on a road. Turn right. After passing the aptly named Mount Pleasant Farm look out for Park Lane on the left.

Option B - If having got to Common Road you think better of it, an alternative is to take the tarmac track which starts parallel to Common Road and then swings right to follow the course of an old railway. When disused sandpits come into view, turn left and go uphill with the sandpits on the right. At the top when confronted by a hedge, turn right along a narrow track with wooded ground falling away on the right until you come to what appears to be a path junction. Dog leg left/right to go along the field edge, hedge right. NOTE this route is not on public rights of way but does appear to be used extensively by locals (there is even a dog waste bin at the start) but it could I suppose be closed any time.

The southern end of Bedfordshire includes he Chiltern Hills, which form the highest land in the county. Away from the hills the county is dominated by the wide drainage basin of the River Great Ouse and its tributaries. Most of Bedfordshire's rocks are clays and sandstones with some limestone. Brick making has been an important industry using local clay especially the Marston Vale. The production of sand and gravel has also been important and some of the old workings are now lakes including those at Priory Country Park, Wyboston and Felmersham. Another important feature is the Greensand Ridge, an escarpment across the county from near Leighton Buzzard into neighbouring Cambridgeshire. The key towns are Bedford and Luton.