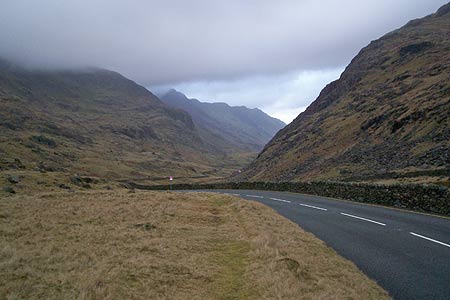 The classic first section of the Snowdon Horseshoe will include an ascent of Crib Goch's East Ridge, followed by a traverse the famous "knife edge arete". This mountain walk/scramble is considered by many as one of the finest ridge crossings in Britain and it certainly lives up to this reputation. Never more than a grade 1 scramble, a reasonable level of fitness and agility will be enough for the experienced hill walker to complete this traverse in fair weather. A word or two of caution before you set out though; much of the ridge is very exposed, especially to your right and moderate/high winds and wet rock will make this a dangerous place to be. Under snow and ice, the whole route becomes a completely different proposition altogether.

Such is the popularity of this wonderful mountain that many complain of the "traffic jams" on the East Ridge as people queue to start crossing the arete. Whilst the simple solution is to start early, the walk described here offers an alternative, quieter and arguably much more scenic approach by way of Crib Goch's less well known North Ridge, which fortunately is also no more demanding than a grade 1 scramble in decent conditions.

From the car park at Pen-y-pass, (grid ref SH647555) turn left and walk down the main road for nearly one and a half miles to reach the lay by on your left (Grid ref SH629566). Already you may be puzzled. Why not catch the bus down from Penn-y-pass or better still, just park in the lay by? Of course it would be easy to just jump on the bus, or leave your car in the lay by, but you would miss the stunning scenery in the Llanberis Pass and the walk down is an easy pleasant stroll and not to be missed. Also the car park at Penn-y-pass is attended and more secure. Also, provided you do not get back too late, the café will be a welcoming sight at the end of the walk.

Hopefully you will decide to walk this first section and almost immediately there is the opportunity to step up and over the low stone wall to your left and walk along the grassed banks away from the edge of the road. Without any real effort, you start to move up the slope and get to see some fabulous views along and over the other side of the Pass. All too quickly though, you reach an obvious point where it is time to descend to the road and the lay by from where you can get a good look at the cliffs of Dinas Mot (direction SSW from the lay by). This also provides you with an opportunity to select your route for the next section.

There is no obvious visible path here and this will generally be the case until you are on the North Ridge itself. However the following route works. To the left of Dinas Mot's main slab, there is a boulder strewn ravine and to the left again a few more metres away, another ravine where the slope does not appear to be quite as steep. This is the suggested start position. The scrambling is easy, but the boulders are small enough that a loose one could be dislodged, so take your time and test the holds whilst ascending, moving gradually to your right.

However, before you even get to the foot of the cliffs though, you will need to cross the river (Afon Nant Peris). Whilst the various stepping stones look "do-able", this will be a bad part of the walk to get wet feet or worse! So it is best to walk a few yards up to the road bridge, cross the river here, go over the stile and then on towards Dinas Mot. Quickly gaining height, you get through the boulder field to the first of several little grassed plateaus from where you get the views around the pass. Particularly impressive are some of the lower cliffs and scree slopes over the other side on the Glydereau, which earlier you looked up at but now are some way below you!

The ascent continues over mixed ground, including grassy terrain and then through some fairly thick heather, which starts to thin as you reach the huge plateau of Cwm Uchaf with the start of the North ridge nearby to your left. You might decide to roam around on the level grassed (and a bit boggy) ground before going up onto the ridge. It gives you the chance to pick your approach rather than just head up the scree right at the northern end. Certainly for us, it would have been nice to have been able to look up at the top of the main ridge from here, but sadly the cloud cover was too low and this remained the case for the rest of our walk.

There was probably nothing in it, but the route we chose was some 20-30 yards along from the northern end and half way up we found the faintest of paths, which suggested we were not the first to decide that this looked the easiest place to ascend. Making your way up this slope, the scree peters out to a splintered rocky surface and soon you are on the crest of the ridge. Only now, for the first time on the walk, there is the semblance of a worn path. Of course there is still a long way to go, but this is a milestone on the route, and standing here, you really can savour the moment and enjoy the views.

There is no feeling of exposure here and with the walking easy we went back along the ridge to see the 20-30 yards we had missed. Turning back towards Crib Goch, the path soon fades and the going begins to get steeper and rockier. Pause here and have a good look at this - the final section before the North, East and main ridges meet. It does look intimidating and will attract your undivided attention. However this final short section is less difficult than it looks, and as stressed earlier, is no more than grade one scrambling. This last bit of effort has its rewards and after a short distance you reach the "lower summit" of Crib Goch and, to your right, there is a convenient sheltered spot where you can take a breather before starting the traverse of the main ridge which comes next. This might also be the first time you meet anyone since you left the car park at Pen-y-pass!

Of course, ahead of you is what you came for and it starts by crossing a wide slab that leans slightly to the left and then you are onto the arete itself. Confident and sure footed walkers will walk along the crest of the ridge, but the feeling of exposure, particularly to the right side might encourage others to take the slightly lower path to the left and use the spiky rocks on the crest as handholds. Soon, with care, the ridge is traversed and the true summit of Crib Goch is reached and if this is a first for you, then it is certainly a moment to be treasured.

However what does not get mentioned too much about this ridge walk is the amount of effort required onwards from here to reach to the next summit, Crib y Ddysgl on Garnedd Ugain. A look at your map will offer clues by showing a height difference of 145m. Choosing the onward route is helped by following the worn path, which for most of this section will be on the crest of the ridge. However almost all the way there seems to be easier options by going to the left, but do not necessarily take them. They will merely lead you away from the crest of the ridge and make it very difficult to regain the high ground. If you do lose the line of the ridge, then either retrace your steps to take another option, or make your way carefully over rough terrain to pick up the Pyg Track further down the slope.

At last you reach the trig point of Crib y Ddysgl (Garnedd Ugain) and the summit of the second highest mountain in England and Wales. A bit understated this one probably because the Emperor of them all Snowdon/Yr Wyddfa is only short walk away. It also an anti-climax because you reach this summit after completing a marvellous ridge crossing. So, on towards Snowdon with the approach now following the combined Snowdon Ranger and Llanberis paths with the railway track alongside on your right. Soon you reach the prominent finger stone (grid ref. SH607548) where the route is joined by the Pyg and Miners Tracks.

A look at your map will show there is only 20m difference between the summits of Snowdon and Crib y Ddysgl (Garnedd Ugain) but it does seem somewhat more on this final stretch. This walk was done during February 2007 and the café that had stood for many years near Snowdon's summit had been recently demolished with work on the new Visitor Centre that will replace it due to resume during April 2007. So at the moment the summit is almost as the purists would have it!

There are various options from here, but the one we chose was the Pyg Track which is picked up by retracing your steps to the finger stone passed earlier on the final summit approach and turning right to follow the path down the mountain. For many, the Pyg Track is dismissed as dull and boring, but it is anything but that. The path is well constructed and completely in character to its surroundings. Undulating above the lakes of Glaslyn and Llyn Llydaw and below the upper ridges that you have crossed earlier, it is anything but boring and leads down the mountain through some of the most beautiful scenery imaginable to bring you to the top end of the car park at Pen-y-pass and back to your starting point.

Note - If you get the chance whilst you are here, do have a look at the old photos adorning the walls of the café. They portray fascinating images of a bygone age when the likes of George Mallory, yes he of Everest fame, walked amongst the same mountains you just have explored. It really makes a fitting end to a perfect day.

Inspirational guidebook to 40 great mountain day walks and scrambles in Snowdonia. Inspirational routes for all abilities across the National Park with routes up Snowdon and Moel Eilio, the Glyderau, the Carneddau, Eifionydd, Siabod and the Moelwynion, Rhinogydd (the Harlech Dome), Migneint and the Arans and Cadair Idris and the Tarrens.
More information