Warning: mysqli_fetch_array() expects parameter 1 to be mysqli_result, null given in /var/www/vhosts/walkingbritain.co.uk/httpdocs/walk-description.php on line 91
 The Welsh Three-Thousanders - Snowdonia Walk 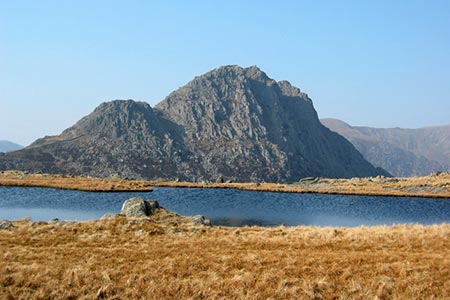 This is one of the great endurance walks of Snowdonia. It is not for novices and should only be attempted if you are fit, competent and able to navigate in poor visibility. The route can be subject to rapid changes in weather and what might be a nice day when you start could soon become a nightmare. Whatever the circumstances always be prepared to abort and admit defeat.

For most people completing 50 km on flat, easy surfaces will be a challenge. To complete the same distance over tough mountain terrain including ascending (and descending) a height equivalent to a third of Everest then you have put the route into context and perhaps immediately decided to leave it until another year! There are some sections where speed is impossible and this is compounded when tiredness starts to take over.

There have been many theories put forward about the route and the one given here begins at Pen-y-pass and finishes at Aber Falls. Obviously there are many ways this can be completed and the route provided here is based on personal preference and includes the hardest sections in the first two thirds of the route. However do not underestimate the final third as you are crossing remote areas far from major roads with any problems increased by fatigue.

At this stage it would be best to define the peaks in order of appearance. They are :-

The fittest will complete this route during the hours of daylight in summer but for those less used to walking then completion in two or three convenient sections spread over a couple of days would be more appropriate.

Much of the route is covered in the walks contained on this website so the broad outline given below should suffice :-

A - Starting from Pen-y-pass follow walk 3036 and descend from Snowdon towards Llanberis as far as Derlwyn (grid ref. 589588) before dropping down to the main road west of Nant Peris. This is "off path" and care needs to be taken to keep away from crags. If in doubt head down to Llanberis and walk up the road.

B - Locate the lane by the Chapel in Nant Peris (grid ref. SH605585) and follow the path into Cwm Dudodyn. Reaching a footbridge (grid ref. SH608596) strike off due north for the summit of Elidir Fawr. This ascent is one of the least interesting of the route and is a real test of character. From Elidir Fawr the onward route to Tryfan is straightforward with the descent from Glyder Fach best accomplished down the steep scree path just to the west of Bristly Ridge. Care also needs to be taken in locating the descent route down the north ridge of Tryfan. If in doubt retrace your steps to Bwlch tryfan ans use the Heather Terrace. Parts of this section are covered in walk 3019, walk 1186, walk 1088 and walk 3001 although most of them have been described in reverse order!

C - Having completed the descent from Tryfan attack Pen yr Ole Wen by the west ridge as described in walk 1150, which takes you through to Carnedd Llewellyn. The next summit, Yr Elen, is and an out and back route from Carnedd Llewellyn before you regain the main ridge and head north to Foel Grach. The remainder of the route from here to the Aber Falls car park is covered in walk 3021.

D - Give yourself a pat on the back!