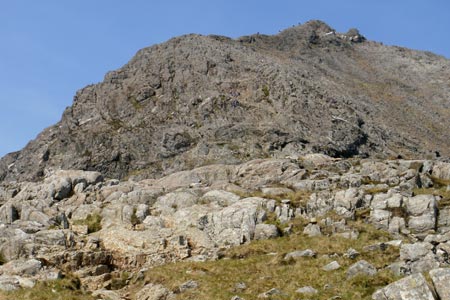 This Snowdonia walk is a slight variation on the full Snowdon Horseshoe as it includes the three Snowdon range peaks over 3,000 feet but excludes Y Lliwedd. My walk description is based on having done the route for the first time in near-perfect weather conditions on a bright, hot, sunny day in May 2012, the only slight downside being the heat with temperatures around the mid 20s. In adverse weather conditions, it would have been a very different undertaking, especially the Crib Goch traverse.

As far as the car park at Pen-y-pass is concerned, the best approach is to try to arrive early to avoid disappointment, especially in good weather and/or at a weekend or on a bank holiday. From the car park, follow the Pyg Track up to the col at Bwlch y Moch. Here the path divides with the main path dropping down to the left before continuing to Snowdon via Bwlch Glas, a much easier route than this one. Take the path to the right with Crib Goch now looming formidably large ahead.

Much has been written about Crib Goch in walking books, magazines and on the internet, often with an emphasis on the dramatic sense of exposure of the narrow ridge. In May 2012, I had the opportunity to find out for myself what was involved. It is sometimes described as nothing more difficult than a seriously exposed walk. That may describe the main crest, though there are other sections, on the way up from Bwlch y Moch and later, bypassing the pinnacles, where the use of hands as well as feet is necessary. There are other sections too where hands may be considered necessary as a steadying influence.

The path up from Bwlch y Moch lasts for a relatively short distance before it ends and the climb begins in earnest. In fact, for anybody in two minds about the whole traverse of Crib Goch, realistically this is the last point for turning back, unless committed to doing the whole ridge traverse. If you looked up at the upper reaches of Crib Goch from Pen-y-pass at the start of the walk and thought there was no way there could possibly be a path up to the crest of the ridge, on closer inspection, this impression proves to be correct. The walker is faced with using their own judgement as to the best way to progress up the rock face. The climb is no more difficult than a level one scramble with plenty of hand and foot holds to choose from. Although not apparent at the time to a first-timer, this section is short-lived before the terrain offers a less steep trajectory where the use of hands is lo longer essential going diagonally up the eastern shoulder of Crib Goch. Especially in fine weather, other walkers may well be seen ahead, effectively leading the way up the shoulder of the ridge while others may be seen already on the main Crib Goch ridge, taking in the views or edging their way along the crest. Even without a path, the general route direction ahead is pretty obvious, especially in good weather. From this point, Crib Goch appears a bit like a pyramid with a ridge running off to the right of it, the north ridge. The knobbly, uneven rocky shoulder enables progress to be made more easily and safely than if it was smooth or loose rock. The walk's start point of Pen-y-pass is seen in retrospect way below along with the Pyg Track leading up to Bwlch y Moch and Llyn Llydaw.

Having climbed up to the crest of the ridge, a rocky platform offers a convenient place to pause, sit down, and take stock of the situation. The peaks of Y Lliwedd, Snowdon and Garnedd Ugain form the backdrop but it is the Crib Goch ridge itself that is most apparent. Although the ground falls away very steeply on each side of the ridge, particularly to the right down to Cwm Uchaf, and it is a very long way down each side, anybody with a basic head for heights should have no cause for alarm. There is little scope for variation in terms of the route ahead so the best idea is to find a way that suits you, using hands as well as feet to steady yourself where necessary, either following the top of the crest or moving along slightly to the left of it. Although Crib Goch is referred to as a "knife edge", some parts of it are relatively wide and can be walked along easily. There is at least one point where the ridge narrows sufficiently to be able to straddle it au cheval. Although it is not clear where it is exactly, the top is about half way along, but the average walker is more likely to be concerned with their own personal safety than whether or not they have reached the highest point. The pyramid-like form of Snowdon towers above and beyond the ridge which undulates further along.

The pinnacles await at the end of the ridge; however, they present no greater difficulty than anything tackled earlier in the walk. Rather than trying to climb over the top of the first pinnacle, it can be more easily bypassed by clambering down to the left and skirting round it while the second one offers no way round to the left; instead it is necessary to pass it on the right on what may appear to be an awkward sequence of exposed steps, but ample hand and footholds should ensure a safe passage. As one fellow walker described this section "It is not as bad as it looks."

Next follows the descent to the col at Bwlch Coch and it may appear that all the difficulties are over; however, not so, for the ridge ahead, leading to Garnedd Ugain involves more clambering up and over rocks, followed by another ridge that is similar in some ways to Crib Goch. Having braved Crib Goch, however, there is nothing along the next ridge which presents a greater challenge than that which has already been tackled. There is a semblance of a path to the right which becomes clearer the higher up you go to the point where it goes round and up to the left with a large cairn ahead. However, this is not the top of Garnedd Ugain as might have been supposed. Instead, the top is a little further along the ridge, but the hardest part of the climb is now over.

The top of Garnedd Ugain is marked by a triangulation pillar and the pyramid-like form of Snowdon dominates the view south to south-west. Despite their proximity and it's rank as the second highest summit in Wales, Garnedd Ugain is often overlooked in preference to Snowdon. The top of Snowdon features the mountain railway a short distance below it, a restaurant and a cairn reached by a flight of steps where you may have to queue to wait your turn.

To complete the route, walk back down to Bwlch Glas with its standing stone and follow the Pyg Track back down to Pen-y-pass.  Although this way of concluding the route is a relatively easy option and omits another summit in Y Lliwedd, in doing so, it avoids a potentially awkward descent route down to Bwlch y Saethau via the Watkin Path which is very steep.