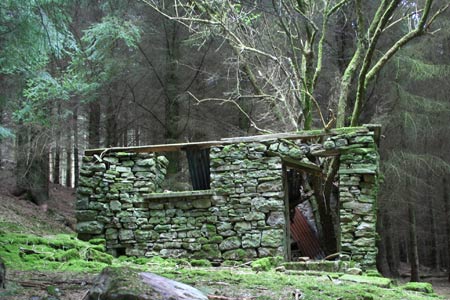 The Ribblehead Viaduct on the Settle - Carlisle line understandably attracts hordes of visitors but it is far from the only engineering marvel on Britain's most scenic railway line. Similarly Wensleydale can be a bottleneck of tourists. But venture south of the A684 main road through Wensleydale and you drop in to the beautiful and tranquil Dentdale from where this route takes you past three of the other major engineering achievements on the Settle - Carlisle line. If you want to see the Ribblehead Viaduct as well, you could always make a slight detour from this route to see it from the top of Whernside - the highest of Yorkshire's Three Peaks.

This Yorkshire Dales walk includes a fairly long section of road walking but it is along very quiet roads that also happen to form a part of the picturesque Dales Way long distance path. The section at either end of Blea Moor tunnel can be squelchy after a shower, let alone after prolonged rain. It also worthy of note that one section of the Dales Way, towards the end of the walk, would appear to have been re-routed since the last update of the OS Explorer map of the area.

The start is the car park (grid ref SD741865) located between the road and the river at the start of the walk. In the unlikely event of this being full, there is a lay-by approx. 50m east along the road. From the car park, follow the footpath directional sign south, passing between the trees and dropping down to a footbridge across the river Dee. On passing through the gate in to the field there is no obvious path but continue in exactly the same direction as you were heading across the footbridge. As you start to climb the gentle slope a metal gate will come into view at the far side of the field. Pass through the gate and across the minor road on to a concrete farm access lane. When the lane bends round to the right, cross the stile on the left to join the Dales Way footpath.

After about 125m the path enters delightful pine woodland. The path remains obvious through the wood. 200m after exiting the woodland, the path emerges on to a minor lane. Before getting to the lane, take the opportunity to look behind you at the tranquil scene of Dentdale with the Howgills providing an impressive backdrop. You follow the lane to where Ewegales Bridge crosses the river. At Ewegales Bridge stay on the south side of the river and cross the stile to join the riverside path - still the Dales Way. The path rejoins the minor road at the picturesque Lea Yeat Bridge.

Follow the minor road - still the Dales Way - for about 1.5km to Stone House Bridge. Along the lane you will get your first view of the impressive Artengill Viaduct. At Stone House Bridge it is worth taking an out and back detour along the bridleway to the viaduct. Display boards have been installed to provide information on the industrial history of the Artengill area. From the bridge, continue south along the road (still the Dales Way) for a further 1.3km to a row of white cottages at Bridge End. Cross the bridge then turn immediately left to join a grassy path that climbs gently across the moor that is boggy in places. To the left (east) the smaller but still impressive Dent Head Viaduct comes in to view above the trees.

Turn right on the Ribblehead path which is the main Yorkshire Three Peaks path and follow it past Force Gill. When you get to a finger post where the 3 Peaks path to Whernside bears off to the left, continue ahead, signposted Deepdale, to a fence.Cross the fence via the stile and then follow the obvious grassy path ahead. After a short incline the path reaches it's high point at Seavey Bottom before starting out on a long gentle descent. Around Duncan Sike you will pass the remains of an old lead mine and care is needed in this area as there are a number of shake holes very close to the path.

Just after passing a series of 5 dry stone walls on the left, the gradient starts to steepen and the path becomes more rocky in nature. Along this section the views of Dentdale gradually start to open up once again to the right. Ignore various paths leading off to the right and follow the main path until it emerges on to Dyke Hall Lane. Turn right (NW) along Dyke Hall Lane to a junction with another minor road, with a chapel set back in the trees on your left. Turn left along the road for a further 250m to arrive at Mill Bridge. Don't cross this bridge but instead take the waymarked footpath on the right to rejoin the Dales Way once more.

About 125m after the path arrives at the river bank, turn left on the path to cross the Tommy Bridge footbridge and follow the Dales Way along the Northern bank of the river. 700m after Tommy Bridge the path turns right to re-cross the river and head South to emerge on to a minor road at Rise View. At this point the OS map is unclear but the diamond markers for the Dales Way imply a path somewhere through the properties at Rise View. I could see no such path on the ground. If you turn left along the road, after about 200m at a lane leading to Laithbank, you will see a disc marker for the Dales Way. 100m or so further on the footpath is altogether more obvious and aligns with the map once again.

Turn left (E) along the path to follow the Dales Way once more, passing a number of farms as you wander along Dentdale. 350m or so after crossing Hacker Gill you arrive back at the top of a concrete farm track we left much earlier in the day. Follow the track down hill to the West, cross the minor road and pass through the metal gate in to the field to retrace the earlier outward route back to the car park.

The Yorkshire Dales National Park covers an extensive area, which contains a wide variety of scenic interest. Each Dale is usually named after its river although there are a few examples that don't follow this rule. The varied underlying geology is reflected in the scenery with limestone and gritstone the prominent rocks resulting in virtually every type of scenery from dry valleys to wild moorland. More Information