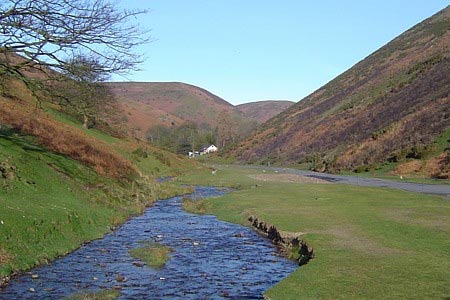 The Long Mynd is a jewel in the crown of the Shropshire Hills. Its barren moorland and rounded, glacially formed hills form an area of glorious desolation in this beautiful county. This walk visits the outlying hill of Ragleth, from which there are some of the best views of the Long Mynd to be had anywhere. It then continues up Minton Hill onto the Mynd itself, visiting the summit of Pole Bank and then offering the choice of a longer or shorter excursion before descending the back to the stunning Cardingmill Valley.

The featureless summit of the Long Mynd is a dangerous place to be in conditions of poor visibility. Map and compass skills are essential, even in the best of conditions. The start point is the National Trust owned Cardingmill Valley near Church Stretton, grid reference SO445944. The top end of the valley has restricted opening hours, so if you are going to be late, park near the entrance.

Return down Cardingmill Valley and enter Church Stretton itself, cross the railway bridge and then use the pedestrian crossing to cross the A49. Turn immediately right along the hedge line. At the Methodist Church cross the road where a sign lists (amongst many others) Ragleth Road. From Ragleth Road, turn right into Poplar Drive where there is a yellow waymark at the top of the road and a footpath turning sharp left. Ignore the stile into Gough's Coppice and a few metres further on is a stile providing access to Ragleth Hill. Follow this up through a small wood as it curves right, left and right again until it reaches the plateau summit. (Ignore the rights of way indicated on the OS maps here).

Ragleth Hill commands the best possible vantage point for viewing the Long Mynd to the West. It also boasts spectacular views in all other directions, not least to the North where the peculiar craggy form of Caer Caradoc can be seen. At the end of this wonderful little hill with its uninterrupted views stands a wooden mast. Descend steeply just to the left of this along a heavily eroded path. At the bottom of the steep descent, cross a stile and turn towards the right, going down more gradually. A fingerpost marks the right of way down to the right. Past a house near the A49, turn left up a tarmac lane until a bridleway is reached leading uphill.

At the top of the short climb a stile is reached on the right. Cross over and follow the path as it turns left and then right down to a footbridge and then uphill into a clearing. Follow a waymark going right along the fence-line. Continue as the route swings left and down to Oakwood Farm. Past the farm turn right and a tarmac road brings you back to the A49 main road.

Cross straight over and slightly to the right an access road on the left takes you to the railway, where the level crossing point is found between buildings, indicated by a blue waymark. Cross and enter a field where another blue waymark indicates the direction of the right of way. Cross the stream and follow a bearing of approximately 300 degrees to the corner of a field, followed by a bearing of 280 degrees to bring you to farm buildings at Minton. Follow the tarmac road to the right and then as it turns swiftly left into the little village with the mass of the Long Mynd looming ahead of you. To the right at the top of the village is a bridlepath granting access to the National Trust land signed Minton Hill.

Follow the most obvious path until it reaches a pair of minor summits ahead. Ignore your OS map and the rights of way indicated. Follow the main path as it flanks these minor summits to the right and then continue uphill towards a small rocky outcrop: Packet Stone. The views from the Stone are truly magnificent, ranging across the woods opposite with the Mynd plunging into the valley below to your left. Continue along this well worn path until it becomes a broad rutted track. As you proceed along here, there are views towards the Midland Gliding Club ahead.

Upon reaching the tarmac road, turn right walking as far as a small car park on the left and a few metres thereafter, locate the footpath on the left ascending to the domed summit of Pole Bank.

From Pole Bank there are superb views to the Stiperstones to the West. Descend along the same line (the Shropshire Way) until reaching a small post waymarked to Priory Bottom. Turn left down the narrow footpath and follow it until it feeds into a larger path/track coming in from the right. Descend past Priory Cottage (nothing but a derelict farm building) all the way down to Coates Farm. Turn right and then left along the tarmac lane, pass the bungalow and up the hill on a bridlepath to meet up with the Shropshire Way. The route is right now (after a brief excursion to the left before reaching a double stile which is not crossed). Follow the crest of the hill until it descends to meet up with the road to Bridges.

Past the Horseshoe Inn at Bridges turn right at the crossroads, pass the Youth Hostel and on to meet the continuation of the Shropshire Way on the left along the course of a beautiful stream tumbling over weirs and rocks. Reaching a RUPP, cross over and continue along the Shropshire Way to Ratlinghope and still following the stream until the stream is finally left behind at Lower Darnford. Here turn sharp left and then right across a field (Shropshire Way), then follow a waymark up a hill to the left. At the summit, the Port Way is reached. Turn right here and follow it all the way to an isolated tarmac lane. Turn right here then shortly on the left is a post signed to Shooting Box. Follow this well defined path for 800 metres to a small waymarked post and two paths leading in from the left. Ignore the first path coming in at a narrow angle and turn 90 degrees left down the Mott's Road and Jack Mytton Way. It is very important that you take the correct path here!

Return down to Cardingmill Valley with some of the best views saved until last!

Guidebook to 32 walking routes in Shropshire in the West Midlands. The routes range from 3 miles (5km) to 12 miles (19km), taking in highlights such as The Wrekin, Wenlock Edge, Long Mynd and Stiperstones, Castle Ring and Bury Ditches. Many routes start near delightful towns and villages including Church Stretton, Ludlow and Bishops Castle.
More information

This AONB consists of a number of areas of hills centered on Church Stretton. The hills are known for the variety, extensive network of paths and wonderful scenery. The most popular hills are the Long Mynd but others including Wenlock Edge, the Stiperstones and those around Clun are also gaining in popularity. More Information