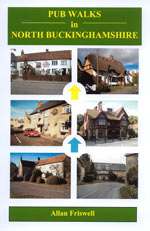 Allan Friswell is a familiar name to those of you using the Walking Britain web site as he has authored many routes for your enjoyment. His first venture as a publisher sees release of this book, which features the countryside around where he walked so frequently. I liked his comments in a letter that he felt "like a schoolboy handing in an essay for marking" when he asked me to pass judgement.

The book is softback with a spiral spine. This allows you to fold the book flat when out walking. With detailed routes for 24 walks varying from a gentle 3 miles through to a more invigorating 8 miles, there is something to suit everyone. Looking through the book, the average length is around 5 miles or so.

Each route starts (and finishes!) at a pub. In addition notes are made of further hostelries passed during the course of each walk. The descriptions are clear, supported by sketch maps (that should be followed in conjunction with an OS map) and illustrations. All in all a tried and tested format.

What I find hard to express is the feeling that Allan knows his stuff. He has obviously spent many happy hours walking in this area and no doubt has visited all the pubs many times during the course of his detailed research!

Books such as this deserve to be supported. Too often these days books are produced by major corporations for the benefit of their shareholders. This is the opposite produced by one person to express their enjoyment of an area. As Allan readily admits "he will be lucky to break even". That's nice in today's commercial world. I have since heard that the first run has sold out and the printers are busy doing the second printing! The book will also feature as one of the prizes for the "My favourite Walk" Competition in the next few months.

Verdict – A very useful book if you intend walking in this area. Although it is relatively flat, the history and quiet pastoral scenes described by Allan make it a useful purchase.